This adorable little red beetle is a Soybean Leafminer (Odontota horni). I had taken this photo last spring and subsequently forgot about. While sorting through photos tonight I came across it and realized I did not have an ID on it. I posted it to Facebook and within minutes Margarethe Brummermann of Arizona provided an accurate identification for me. If you have not visited her blog, please take a few minutes to do so, she is an amazing photographer and artist and has a true passion and knowledge about the natural world. 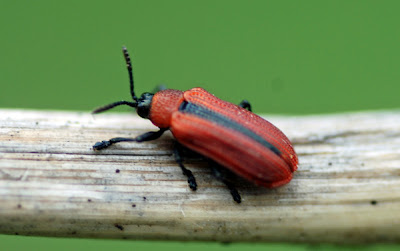 These little beetles are found throughout Missouri, typically near soybean fields. They are not known to cause an significant damage to soybean crops, and are usually found near the field margins. The adults nibble at the leaf tissue causing a skeletonized appearance to the leaves. The larvae of these beetles "mine" the leaves, creating a blister-like damage between the lower and upper leaf surfaces. The soybeans generally are not adversely affected by the feeding habits of these beetles. There is some risk that they may pass along bean pod mottle virus. In some areas there is as much as 80% damage by this pathogen that is passed on to the plants by these beetles. 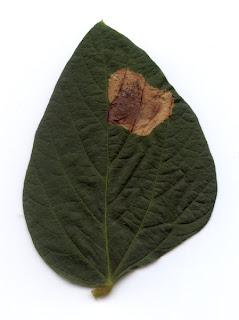 (Damage caused to soybean leaf, by soybean leafminer: photo taken from IAState University website)
This species is small at about 1/4 of an inch in length, they are brick-red with a black stripe down their back that does not extend to the wing tips. There is a similar species called the Locust Leafminer (Odontata dorsalis) that is also found in Missouri. They are also reported to sometimes feed on Soybeans, but much more often they feed on the food source they are named after, the locust trees. This beetle is also red, but the black stripe widens and extends all the way to the wing tips. Look at the first two beetle photos and compare it to the last one and the difference are obvious. It would however be easy to mistake one species for the other without having both in hand to compare.

Some of our most beautiful insects are often the easiest to overlook, keep your eyes peeled for the tiny species, as they often are some of the most remarkable in coloration and design. 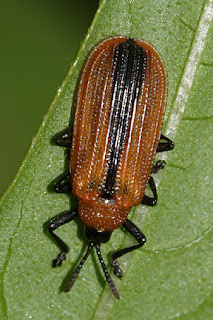