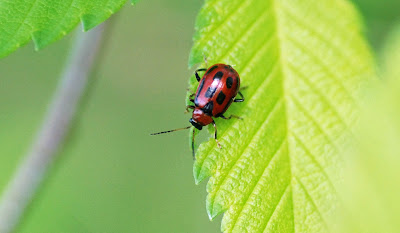 This tiny beetle is a Bean-Leaf Beetle (Cerotoma trifurcata). They are up to 1/4 of inch in length and can vary in color from red to yellowish-tan as pictured here. They will generally have four rectangular shaped spots on their elytra (wings).
Because there is so much variation in the appearance of this beetle, including specimens that are free of the rectangular spots, that the most reliable source of identification is the triangular black marking at the base of the thorax where the wings attach. This marking is ALWAYS present on this species and will accurately help you identify them from other species of bean beetles. This particular species is found throughout the Eastern United States, parts of Canada and Mexico. 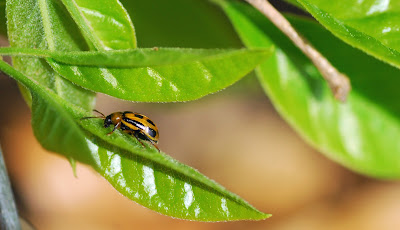 They overwinter as adults and become active in the spring with the return of warm weather (50-55 degrees). Soon after becoming active again they will begin feeding on the early foliage of soybeans and other legumes. If the spring is wet and cooler and planting of soybean crops is delayed until after June first, the chances of the first generation of these beetles becoming established is greatly reduced. Successfully bred females will deposit their eggs in soil and after hatching will feed on the roots of the plants. A single female is capable of producing up to 200 eggs. This root feeding does not usually cause significant damage to the crops, instead it is the late season feeding of the adults on the plants themselves that causes the biggest problem for soybean farmers. These adult beetles attack the foliage and the pods, and a veritable feeding frenzy will occur once the pods begin to dry out in August and September as the pods are tender and tasty, something any self-respecting adult bean-leaf beetle cannot refuse. 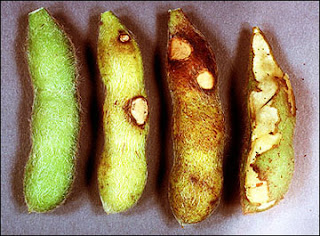 Originally they were a secondary pest of soybean crops, but by the 1970's their numbers had begun to increase exponentially and they are now tied for second place as an important pest of soybean and other legumes. There are even reports of this species transferring its feeding preference over to pumpkins. 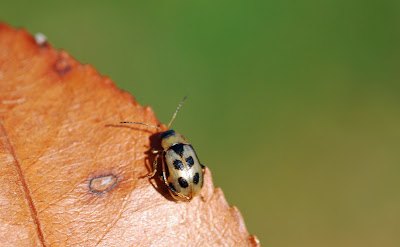 (Damage of feeding adults on soybean pods--picture taken from University of Missouri)
This intensified feeding of the adults can cause moldy beans by enabling infection to spread through micro-organisms present at the feeding sights. These micro-organisms is what leads to moldy beans. This mold may lead to incomplete development of the bean,it may also allow the beans to adhere to the pod which are then lost during the harvest process, and the presence of mold can greatly reduce the quality of the harvest and leads to dockage when selling. They are capable of having up to three generations per year, although there is only two generations in Missouri. The first and second generations are the ones most likely to cause the moldy beans syndrome. Even though late planted fields generally won't be attacked by the feeding of first generation adult beetles, they still are not free from harm as the possibility of first and second generation beetles migrating into these fields from nearby fields is a very real threat.
Early sweep netting of soybean fields can help determine the presence of these beetles and to what extent the infestation is. If there are two or more beetles per sweep and 15% or more of damage to plants, then a rescue treatment may need to be applied to the plants to offset any further damage. 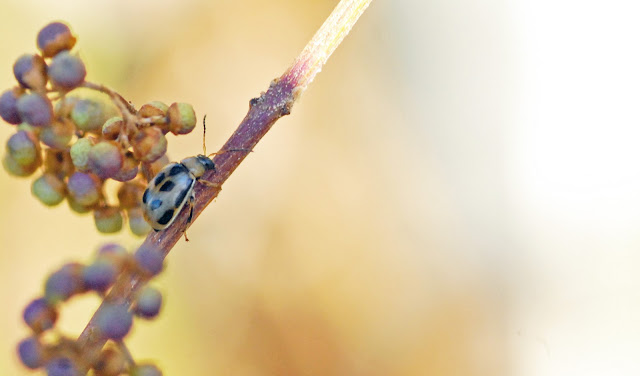