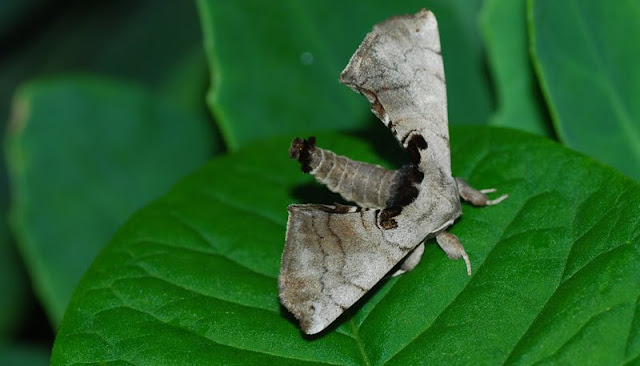 This oddly shaped sphinx-like moth is called a Spotted Apatelodes (Apatelodes torrefacta). They are in the family Bombycidae which are the Silk Moths.....Sphinx Moths are in the family Sphingiidae. They are a moderately sized moth with a wingspan up to 2 inches.  The adults are gray with brownish colored lines running through the forewings.  They will often continue the ruse of appearing like sphinx moths by holding their wings and tail up at a vertical angle (pictured).
Look for them in deciduous woodland and nearby areas from Texas eastward to Florida and north to southern Ontario. The larvae feed on Ash, Maple, Oak and Cherry. Most likely in Missouri there will be one generation per year.
UPDATE: I checked the BAMONA (Butterflies and Moths of North America) website for this moth in Missouri. There were no recorded sightings. I reported this moth to our Missouri representative Philip Koenig. He said he would add the information to BAMONA. Looks like my sighting of this particular moth may be the first for Missouri...or at least the first one reported.
Posted by Shelly Cox at 10:03 PM