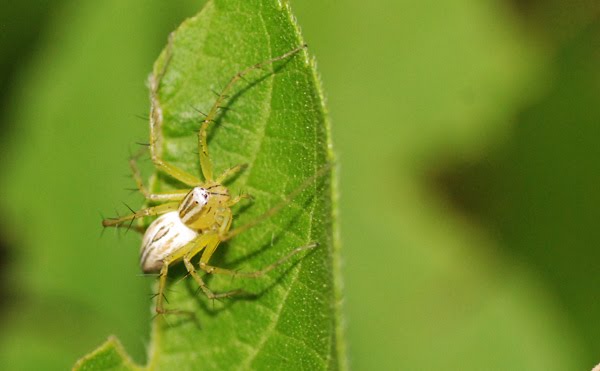 Lynx aren't just four-legged, furry and found in the northern regions of North America feasting on rabbits and mice. There are also lynx right in your very own garden, probably no matter where you live. These lynx are the eight-legged variety and dine on much smaller prey then their larger, furrier namesake. I've often admired the beauty of Lynx Spiders and up until last night had never seen one. I was convinced they did not live in my part of the World. Imagine my shock when I submitted this photo to Spider Identification and Eric (Bug Eric) answered promptly, letting me know I had indeed found a Lynx Spider. This one is called a Striped Lynx Spider (Oxyopes salticus), they can be found in grassy, weedy fields. This one was photographed on our pond dam in the tall grasses. I nearly walked right past it, as it was so tiny at barely 3/8 of an inch. I noticed a movement out of the corner of my eye and discovered this darling little spider, who turned out to be my nemesis! Now I will be on the look-out for more. 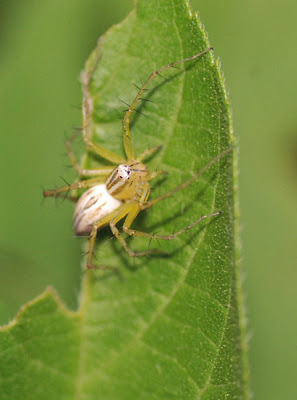 It just goes to show you never know what you will find when on a bug hunt. It seems each day brings something new or interesting with it. To say I am excited by the fact that these lovely spiders are here on our farm is an understatement. I know they are considered common, but to me they are precious.

Happy Hunting guys....see what buggy treasures you can find!
Posted by Shelly Cox at 3:30 PM