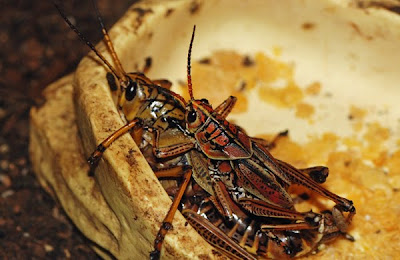 These humongus grasshoppers are called  Eastern Lubber Grasshoppers (Romalea guttata). They are the only lubber grasshopper native to the Eastern United States, although you will not find them in Missouri. I photographed these beauties at the Omaha Zoo at the new Insect Exhibit. I thought they were so beautiful that I wanted to share them with everyone. If you visit our neighboring states of Arkansas and Tennessee, you are likely to find them as they are known to be there, as well as Alabama, Florida, South Carolina, North Carolina, and Georgia. In the west they occur in Texas, Mississippi, and Louisiana. These are extremely large, flightless grasshoppers that measure up to 3 inches in length. Their bodies are thick and heavy. The coloring is a warning of their bad taste, and when disturbed they will secrete a foul tasting fluid and hiss angrily which is sure to ward of potential predators that would typically dine on grasshoppers. I'm sure a bird coming across a grasshopper this large would think it hit the motherlode of all grasshoppers....until faced with the defense system that this large hopper has in store for it. 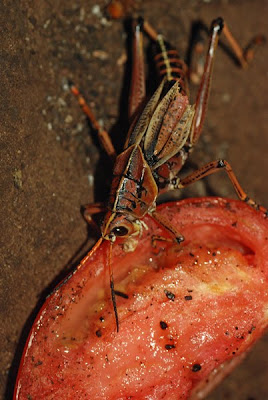 In the wild they feed on a variety of vegetation, including pokeweed (oh how I wish we had them in Missouri...the pokeweed has taken over my gardens and I fight to keep it at bay), pickeral weed, sedges, arrowhead, and lizards tail. They can be found in a wide variety of habitiats including yards, pine forest, along roadsides, in croplands and open fields. They seem to prefer moist areas. At the zoo they were being fed fresh tomato wedges and other fresh vegetables, which they seem to relish.

Their common name of "lubber" means to be clumsy or lazy.....which may have to do with their slow movements and lack of flight. With a chemical defense such as they have fast movement and flying would not be necessary, this allows them to conserve energy, so maybe it is not being lazy at all, just frugal.

If anyone reading this entry has these grasshoppers in their yards, on their farms or anywhere nearby....I would love to have some to keep in captivity to use for programs with children. Their large size would make them a hit with the kids. I also have an event coming up in September called Insect-O-Rama and would love to have some interesting insects to exhibit there. I will happily pay for postage and handling.
Posted by Shelly Cox at 9:16 AM