No other spider has generated as much interest this year than the Wolf Spiders. Beginning in late August people began bringing them into my office wanting to know what they were. Some specimens are very easy to identify, but with so many Wolf Spiders out there many of them can be quite difficult. They range in size and coloration from barely 3/8 of an inch to well over 3 inches (with legspan) and can be light tan to almost black. 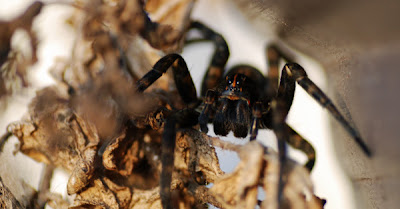 The most common species that seemed to show up was this very dark (almost black) species in the genus Hogna. They are certainly one of the larger species of Wolfies. They have very large chelcerae (fangs) and aren't afraid to use them. I've mentioned before my husbands ability to attract insects that bite and sting like poo attracts flies. This September he came into the house in a panic, flushed and sweating. He said he had been bitten on the toe inside his boot. He shook the boot out and found a medium sized spider and had no idea what kind it was. I assured him it wasn't a particularly dangerous species, that it was a wolf spider and their bite is very painful. He said "NO KIDDING!" I felt bad for him, because this particular bite followed a similar bite he received on his back about 3 weeks prior. Something had fallen down his shirt when he went into the chicken house to get the eggs. It bit him HARD before he even knew anything was there. The bite swelled and itched for weeks. He just got over that bite and then according to him was "attacked again." This bite also swelled and bothered him for weeks. He said he now knows what bit him on the back, the bites felt exactly the same and both bites reacted the same. He was on an all out mission to kill each and every spider he found after that. I really couldn't blame him, although I really didn't want him killing them. 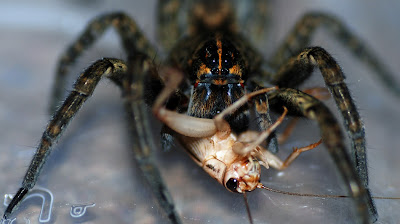 Wolf Spider numbers were definitely up in our area this year. I've found no less than 20 in my basement alone. A friend of mine found one on her ceiling, and from the amount of them that were brought into my office this year for ID, I can honestly say there are no shortage of them this year. So I guess the fact that my husband is killing in retaliation to his perceived attacks can be tolerated as acceptable losses.

My daughter is terrified of spiders, yet knows that I am fascinated by them. Her and a friend found one crawling around outside her friends house and decided to try and catch it for me. Her retelling of the story had be in stitches as she describes the two of them screaming and squealing as they corralled this "monster" into a container to give me. I assured her it was the best gift ever, and in fact I kept it. I've been feeding her crickets(Above) and gave her a very nice container to live in. The other day I went downstairs to feed her and discovered she is about to be a mommy herself. She had formed an egg sac and was carrying it around on her spinnerets. 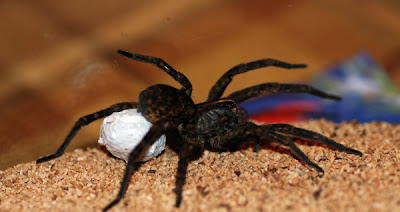 I am assuming that sometime within the next 4 to 28 days the eggs will hatch. Nothing like a broad range to keep you wondering when the big day will be. Now I have no choice but to keep a close eye on her. I really want to get pictures of the babies hatching.  When the egg begins opening the female will help the young spiderlings emerge from the egg sac. The spiders will then crawl on top of their mothers back and ride around with her for several days until they molt for the first time (pictured below). 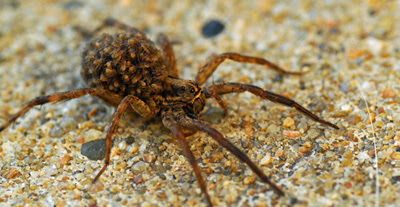 Wolf Spiders are in the family Lycosidae, from the Greek word lycosa meaning "wolf." These are very successful predators and are often compared to wolves in their hunting tactics. These spiders are quick and agile hunters and stalk and chase down their insect prey. Their eyes are key identification feature, there are three rows of eyes, the first row contains 4 small eyes that are situated on the front of the face, the second row of two eyes is much larger and aim forward. The last row of two medium-sized eyes sit atop the carapace and give the spider rear and lateral vision. They have exceptionally great eyesight for a spider and most likely can see well at night also.

With over 200 species in North America there is no shortage of wolfies to find and study. Don't count on finding them in webs as they do not build traditional webs like Orb Weaver spiders. They hide out under vegetation, rocks, logs, in sheds, basements and garages and some will even dig holes in the ground to retreat into. They will use silk inside these holes in the ground to help conceal them or to spend time resting or waiting for prey to pass by, and the females use silk to create their egg sacs. Many species have no form of retreat at all and will instead run away from danger. 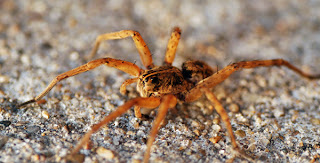 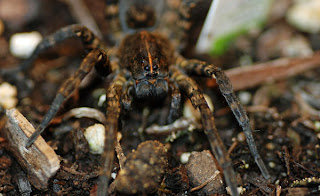 I had one gentleman call me about a month ago concerned because he had many of these large spiders hanging out in his front yard underneath a pole light. He said they were very large and there were well over 20 or 30 of them. He was concerned they would bite his children or get into his home. While I could not assure him that they would not make it into his house, I did my best to convince him to not kill them, and told him that the reason they were congregating around his pole light was to eat the insects that were also attracted to the light. 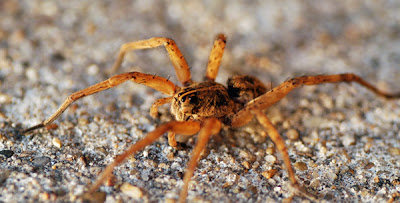