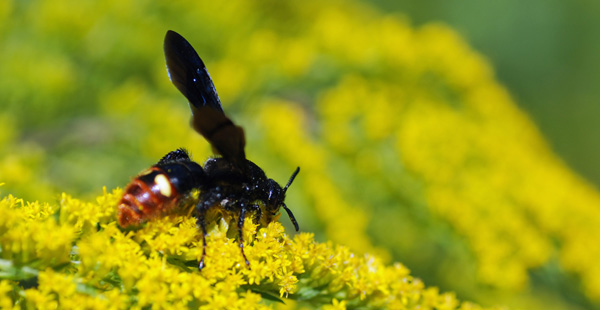 Blue-Winged Wasps (Scolia dubia) are in the family Scollidae and are found east of the Rocky Mountains. They are very common in Missouri and are usually seen in late summer or early fall. The one pictured here finds the taste of goldenrod much to its liking. These are not large wasp with a total body length up to one inch. They are mostly black with 4 reddish colored segments on their abdomen and two bright yellow spots midway down the abdomen. Their wings are metallic blue just as their common name suggests.

Males and females engage in elaborate mating rituals that involve the male dancing to attract the attention of the female. After mating, the female will dig in the ground searching for the grubs of Green June Beetle grubs, or Japanese Beetle grubs to sting and paralyze. Then she will dig deeper into the soil and create a chamber to place the grub. She will then lay an egg on the beetle larvae. When the egg hatches the young wasp larvae will feed on the paralyzed grub. After consuming the entire grub the wasp larvae are ready to create a pupa and spend the winter underground tucked away all safe and snug out of the winter cold. The following spring, perhaps in May they will emerge from the pupal cell and dig their way out from underground and take flight for the first time. As adults they will feed on the nectar of a wide variety of flowers and can be found along roadsides, in prairies, backyards, meadows, and in gardens.

Because of their preference for using Green June Beetle grubs and Japanese Beetle grubs these wasps are considered beneficial. They do their part to help control the populations of these often times harmful insects.They are also a mild tempered wasp and are not aggressive towards humans. The main reason for this calmer demeanor is the lack of hives, queen and siblings to protect. Because of their solitary lifecycle and lack of parental or offspring care they have nothing to feel aggressive about.
Posted by Shelly Cox at 1:27 PM