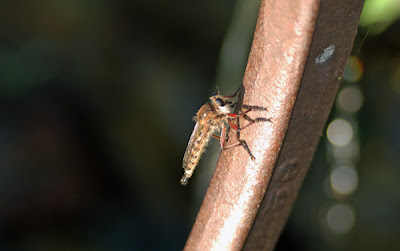 Very few insects generate as much interest as these large predatory flies. They are called Giant Robber Flies, and being called a giant it a very apt term. They reach lengths up to 2 inches....which is incredibly large for a fly. They are sometimes called bee killers because of their preference for eating bees and wasps. I've seen these guys attack and eat bumble bees!!! It is a pretty impressive insect that can accomplish that feat. 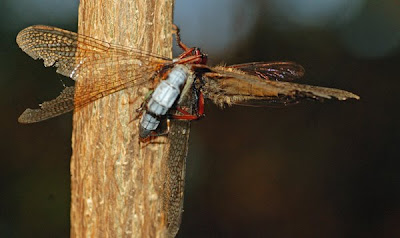 This large fly is feeding on a dragonfly. When I first saw this dragonfly I thought something had already fed on it, I reached out to touch it and that robber fly let it go and flew straight at me. Scared the CRAP outta me. I literally screamed.
These giant robber flies are in the family Asilidae. I'm not sure which species are pictured here, I know there are at least two different species, but for me they are difficult to ID to species. These giant robber flies belong in the family Promachus. These flies are found Worldwide, and seem to be ,more commonly seen during the summer months. They are often found in open grasslands, sometimes near timber lands. Look for them perching in sunny locations awaiting their insect prey, where they will fly out rapidly and grab with their powerful legs and carry back to their perch and feed.

Mating is an aggressive affair. Males will fly out and pounce on females much like they do when grabbing prey. They will remain interlocked tail-to-tail for some time. They are still capable of flight while mating. Last night I stumbled upon a pair mating and they flew quite rapidly into the woodlands near a pond and out of sight before I could capture an image of their behavior. These flies are very quick and difficult to approach. 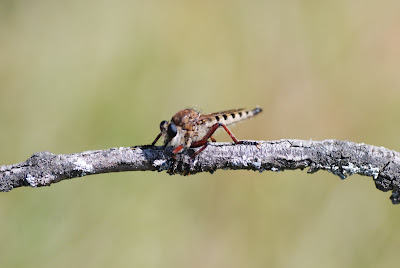