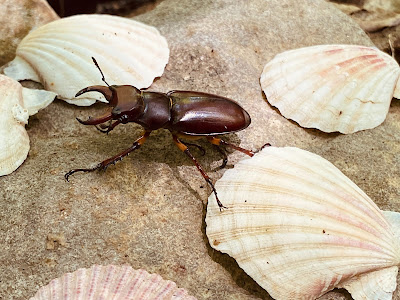 On a recent trip to Alabama while walking through the woods at a historical site my husband spotted this large beetle on the ground. I stopped to pick it up and place it on a nearby wall for a few pictures. I knew immediately what it was having encountered them at home many times. The reddish-brown stag beetle (Lucanus capreolus) is one of the largest beetles in Missouri reaching lengths up to 1 ½ inches. They are indeed reddish-brown in color, with yellow-orange hairs visible around the thorax and along the abdomen. The males possess long mandibles (jaws). Their species name of capreolus comes from the Latin word for roe deer, because individuals who give names to the flora and fauna of the natural World thought those menacing looking jaws resembled roe deer antlers. Even though those jaws look fearsome, they are actually harmless. They are incapable of biting, but rather give a pinch which earned them another common name of pinching beetle. The females on the other hand have shorter mandibles, with more strength and may bite if mishandled.

The jaws on the male are not meant for capturing prey or for eating, instead they are weapons in the mating game. Females release a pheromone into the air that males from great distances can smell. This will attract numerous amorous males to her all determined to win her attention. When rival males encounter one another, they use those large mandibles to topple over the competition in a form of a beetle WWE smack down. They will lock mandibles and shove each other while twisting and turning attempting to flip their opponent. The winner earns the favor of the female. Soon after mating the female will deposit eggs in the trunks of dying or dead trees. The larvae will feed on the remaining heart wood of the decaying tree. It may take up to 3 years for the larvae to reach the adult stage, when it will only live the for the rest of the season. The only exception would be if it is able to find a warm area like a compost pile, it may survive until the following year. Because of their preference for trees already in a state of decay they possess no threat to living trees. Adults feed on sap flows, in captivity they will readily eat diluted maple syrup or sugar water. Some will feed on the juices released by overripe fruit like fallen apples, or peaches. They do not possess any real ability to chew, instead they consume their food through the hairs near their mouth that capture the juices of their liquidy dinner.

In the larval stage they are a favorite food of raccoons, and woodpeckers that dig them out of the stumps they are feeding within. These would be the little cream filled ones Timone and Pumba favored in Lion King.  Skunks, foxes, birds, bats and frogs all eat the adults. There is a lot of protein in a beetle this large, in fact there is more protein in a large beetle than in a piece of steak the same size! Humans often pose a threat to the survival of stag beetles throughout the World. In many areas of Europe, they are protected from illegal collecting for the pet trade. Believe it or not large beetles are a black-market commodity for unethical insect collectors. This poses a serious threat to existing populations and diversity of beetles all over the World.

In addition to cracking down on the illegal collections of beetles, throughout Europe, woodland areas that are known to have populations of stag beetles need special permitting to proceed with whatever plans they have for cutting and removing trees. This ensures that beetles will survive by being moved to appropriate locations nearby. These beetles tend to bask in the sun and look for warm pavement to sit and soak up the sun’s rays. These forays into the sunshine often result in cars running them over or people trampling them. In some cases, humans deliberately kill them because of those large mandibles and ferocious appearance it gives them, not realizing this beetle is harmless and even beneficial. The constant feeding of the larvae breaks down the decaying trees returning nutrients to the soil.

Stag beetles have a long and interesting history rooted in folklore. The Germans called them Donnerschroter, which translates to Thunder beetle, because of the belief that these beetles summoned lightning. Other areas of Germany believed these beetles carried burning coals into homes starting fires. Still other cultures call them Devil beetles because of their horn-like mandibles. Other parts of the World refer to them as billywitches, oak-ox, and horse pincher. We can only imagine how those names took root. By whatever name they are referred to stag beetles evoke many emotions, fear, awe and even respect. Cultures all across the world feature myths and folklore about them. Many land managers are beginning to understand the role these beetles play in the ecosystems where they occur and manage their land accordingly, by leaving stumps, and decaying trees. Next time you are considering tidying up your woodland or yard, consider leaving trees in an advanced stage of decay, including logs and stumps. The beetles, and other invertebrates who depend on them, will be grateful.