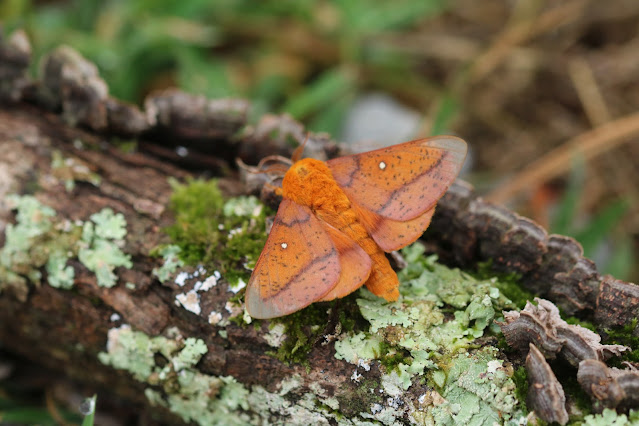 On a recent trip to Waterloo, Alabama, I found this orange-tipped oakworm moth (anisota sexatoria) hanging out on the back of our rental. They are also referred to as the orange-striped oakworm moth or Peigler's oakworm moth, and are found from the eastern edge of the great plains to the east coast, and south to Georgia, Alabama and Texas. They are far more abundant in the Northern regions.

The stunning rusty-orange coloration bordered by a pinkish hue makes this small moth both eye-catching and memorable. Males are larger than females, and much more colorful. The smaller female is lighter in color and blends in more with the oak trees she uses as her host. Some scientists even believe that the male coloration mimics bees and wasps. This would give them a certain amount of protection from hungry birds who might find a moth tasty, but a bee formidable. Females release a pheromone to attract males, sometimes from great distances. After mating, females will lay eggs near the host tree. Oaks are nearly always chosen, especially red oaks.

A couple of reports I read said they will also feed on some maple species, chestnut (which makes sense, as it is a relative to the oak), birch, hickory and hazel. I have no idea if these reports are true, as most information said their host is entirely oaks.

The excessive hairy scales covering the body would add extra insulation against cooler temperatures, which makes since as the largest portion of their population lives in the Northern regions of the United States. In those areas huge outbreaks can occur giving them pest status. Under normal circumstances there is no lasting damage to trees. They are a late season feeder, so the trees are already fully leafed out and developed. The caterpillars are defoliators and will strip the leaves of their chlorophyll filled green parts in no time. In areas where infestations are excessive the defoliation of trees can weaken them, making them susceptible to other environmental stressors, like disease. In those situations trees may be in danger of dying.  Like all adult silk moths, they do not feed in the adult stage, instead they get all their nutrition during the caterpillar stage. As adults they have very short lifespans, and die shortly after mating.