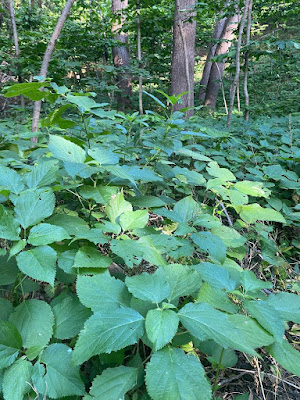 On a recent trip to Loess Bluffs National Wildlife Refuge, in Mound City, MO to lead a micro-hike for a group of junior naturalists we found a sea of dark green plants growing in the woodlands. These plants were approximately two feet high with large, serrated leaves, and a few possessed delicate tiny whitish-green blossoms. This was the predominate plant in the area, yet none of us were sure what it was. Then we began noticing shiny, egg-like growths on the leaves. What were these plants? What were these growths? One of our hikers pulled out his phone and we soon had an answer. These were wood nettles! The growths? Those were nettle galls! We had our answer, but as with most answers, come more questions.

I was very curious about this particular nettle and how it was related to the common stinging nettle most of us are familiar with. Wood Nettles are native to Eastern North America and are common in moist open woodlands, along streams and in drainage areas. They quickly spread by rhizomes and can become the predominant plant in a given area. Each plant contains both male and female parts and are pollinated by wind rather than insects. This perennial is an important dense cover plant for native wildlife like quail. Whitetail deer forage on the green leaves and seem to not mind the stinging hairs on the foliage. Several butterfly species use this plant as their host, including the comma, and question mark and the red admiral. Other insects, like the tiny gall midges also utilize the nettle. A midge will lay an egg on the plant, when the tiny larvae hatches, it will begin feeding on the leaves. This feeding creates a response in the plant and a gall will form around the larvae. Many weeks later the adult midge will emerge. Midges are one of the largest groups of insects in the world. Most are harmless, some cause considerable damage to crops and still others feed on the midges who are causing damage. In the case of the nettle midge, it poses no threat to the plant. 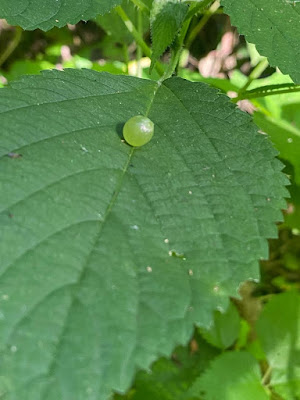 One of the most notable characteristics of nettles are the stinging hairs each part of the plant is covered in. Wood nettles have both stinging and non-stinging hairs on the leaves and stems. Brush too closely to one, or mistakenly grab one like I did, and you will be left with a painful burning, stinging reaction you will not soon forget. Lesson learned! Individuals who are extra sensitive to the barbed hairs may swell, turn red and develop rashes or welts where the skin came into contact with the plant. This can last for several days in some cases. Fortunately, my reaction was short lived.

The common stinging nettle that we are most familiar with is a European cousin to the wood nettle. Early immigrants knew the forage and medicinal qualities of this plant and brought it with them to the New World. Unbeknownst to them, the native wood nettle was a comparable alternative to the plant they were previously familiar with. As with most non-native plants they can quickly become invasive the common stinging nettle is no exception. While the plants are similar, there are some differences, including the leaf arrangement. Common nettles have leaves that are opposite on the stem, whereas wood nettle have alternate leaves. The wood nettles tend to have wider, larger leaves compared to the much thinner leaves of the common variety. Both species however possess stinging hairs, and some claim the woodland variety packs a more powerful punch.

The history of nettles in terms of human use and benefits dates back centuries in Europe, and much of what was known was lost during the inquisition and the subsequent persecution of the “witches” who possessed the healing knowledge of the flora in their area. Healers and herbalists of the time were feared and persecuted for their seemingly magical ability to cure people from all manner of illness and injury. Often, they were called witches and paid with their lives for doing nothing more than helping humankind. Thankfully, many modern herbalists and healers are keeping the knowledge alive. Both common and wood nettles have many uses. Native people used the leaves and stems to make nettle tea that would facilitate childbirth. Meskwaki and Ojibwa used the plant as a diuretic and to treat other urinary issues. Tonics could be made to treat chronic diseases of the colon. Leaves were applied as a styptic to stop bleeding.

The strength of the fibers within the stems were valued by Native tribes as well as Europeans to make a type of hemp thread that could be woven into cloth. Fibers could also be turned into cordage to make nets for capturing fish, or to weave into pouches and baskets. This cordage is reported to be as much fifty times stronger than cotton cordage. Europeans turned the fibers into a type of paper as well, and just think how many trees could be saved if we still did this! Sufferers of arthritis or rheumatism seeking relief from their discomfort would purposely allow themselves to be stung by the leaves. This generates a response from the immune system that purportedly offers relief that may last up to a week. 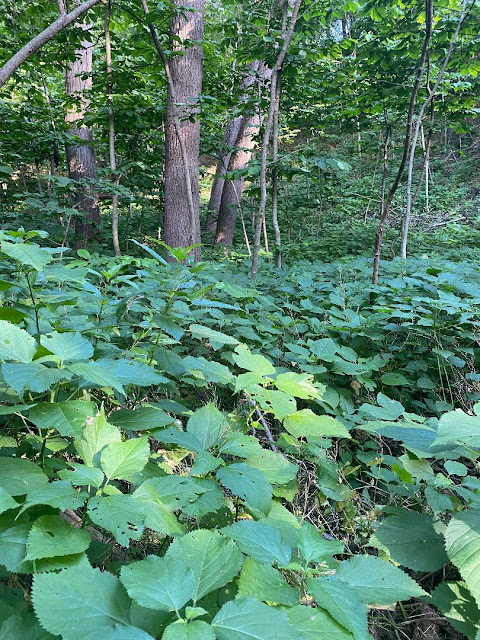 This wild edible is reportedly delicious if you can get past the stinging hairs. Foraging should be done carefully. Always wear gloves, the hairs on this plant can even penetrate clothing. So why bother? This plant is rich in vitamin A and C, iron, and proteins. The flavor is similar to a salty, fishy, spinach that pairs well in soups with quail eggs and dill. If you steam the plant, there is a floral taste similar to apples or cherry blossoms. Use scissors to clip young shoots or to snip off the young tops, place in a brown paper sack. Refresh in icy water once you are home. Make sure to dry completely before storing, if too much water is left on the leaves, it will cause the plant to wilt, and sour essentially spoiling it. Store in a zip-loc bag with a damp paper towel. Poke a hole in the top of the bag for air flow. The nettles can be kept for a week in the refrigerator this way. Bring out to add to your favorite soups, egg dishes or other recipes. Cooking the nettle removes the stinging hairs, so no worries of an unpleasant culinary experience. Venturing outside for some time in the woodlands often yields not only peace-of-mind, but dinner as well.
Posted by Shelly Cox at 5:16 PM