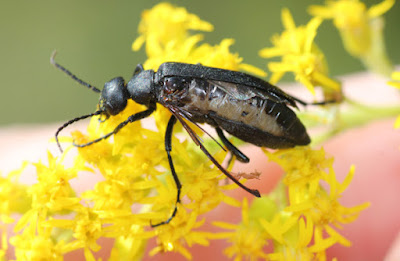 One of my favorite things is to help people identify insects or help resolve issues they may be having from insects wreaking havoc in their yards or gardens. Recently I received an email from someone near Kansas City that was experiencing a plague of blister beetles feeding on her milkweed. She said they had stripped the leaves in a day, and wondered if I had ever witnessed or heard of blister beetles feeding on milkweed? I had not and told her I would try to find out if this was commonplace. After asking around and submitting her image and question to a group I follow on Facebook. Turns out this is not all that uncommon, which surprised me. We know that a wide variety of insects, including monarchs and milkweed beetles are adapted to feeding on milkweed and can tolerate the toxins within the plant, and even gain some benefit from those toxins and are often inedible to predators. To have insects not typically seen on milkweed or known to feed on it, decimating it, seemed odd to me. I empathized with this person as she had planted milkweed to help the endangered monarch butterflies and in a matter of hours lost her plants to an insect often viewed as a nuisance.

There are over 2,500 species of blister beetles found throughout the World and approximately 250 species in the United States. The most common in our region are the ash-gray blister beetle, black blister beetle, striped blister beetle and the black and gray blister beetle. All have elongated body shapes with a very narrow thorax. This cylindrical shape seems to be characteristic of blister beetles. They also possess a chemical held within their legs called cantharidin. This chemical can be potentially harmful or even deadly to horses. It is believed that as few as 550 beetles, if ingested while grazing, or eating hay, can kill a foal or small horse (275 pounds or less). This is also dependent upon the species of blister beetle present and how sensitive your horse is to the chemical. For those pasturing your horses you need to be diligent and apply control measures to eliminate these beetles from your pastures, or hay fields. This same chemical is also used to create a controversial drug called “Spanish Fly.” It is this chemical that earned the beetle their common name of blister beetle. When skin comes in contact with the chemical a reaction occurs and can create painful blisters. I myself have experienced this. A few years ago, one landed on my neck, I brushed it away, but not before it released a healthy dose of cantharidin and left blisters on my neck that were painful for days. This is chemical warfare at its best in a bug-sized package. It is believed that many species may have as much as 50% more concentrations of cantharidin than other species. The striped blister beetle is one such species with higher levels of this chemical. I don’t want to sound all doom-and-gloom when it comes to these insects, like nearly all bugs there is a good side. With the blister beetle it comes in the form of pest control, and in the creation of various drugs. One of which treats pox viruses like chicken pox. 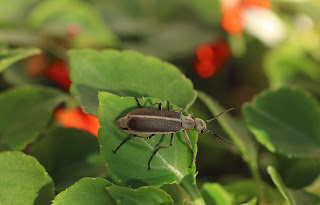 The female lays clusters of eggs within the soil. When the eggs hatch, many species of these beetles seek out grasshopper eggs within the soil, or young grasshopper nymphs that are near the surface of the ground and ready to leave the soil. They will feed on these eggs and nymphs, thus controlling future populations of these often nuisance insects. Some species even feed on the eggs or larvae of other blister beetles or even bees. All blister beetles are carnivores in the larval stage. Grasshoppers can occur in near plague-like populations and wreak havoc on agricultural crops and garden produce. Not to mention their craving for screens, clothing and other non-food items that make them a pest near homes. This biological control the blister beetle provides is beneficial in helping control grasshopper population explosions. In the adult stage blister beetles feed on a variety of plants, some, but not all include carrots, soybeans, alfalfa, clover, radish, cabbage, and ornamental plants like hosta. As well as milkweed, apparently. They are also fond of pigweed, and ragweed. Keeping these noxious weeds out of your landscape can go a long way in reducing blister beetle numbers. Picking the beetles off plants and destroying will reduce numbers, especially if done before large populations are allowed to establish. Placing lime or Diatomaceous Earth near plants won’t kill the beetles but will repel them.

This year, according to several individuals I spoke to, is a boom year for blister beetles. What causes insects to have boom or bust populations from year-to-year? There are often numerous reasons, and in the case of the blister beetle, it could be the past few years of excessive grasshopper numbers. With so much food available to the blister beetle, their survival rate would be greater as would their population numbers. We also had a milder winter, and plenty of moisture early on in the spring. All of these conditions combined could have contributed to the explosion of blister beetles this year. 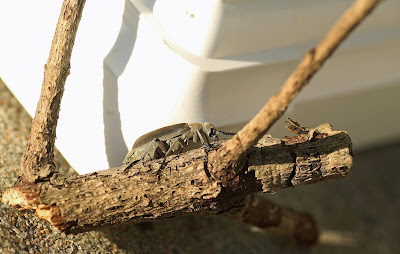 Love them or hate them, there is both good benefits and downright bad effects caused by the blister beetle. If you have horses and notice blister beetles in your pastures, then control may be warranted. If you have garden produce being destroyed by the adults feeding habits control may be needed. However, if the feeding is not causing issues, leaving them may be the best choice, thus allowing them to do their best work in the form of controlling those damaging grasshoppers.
Posted by Shelly Cox at 3:48 PM