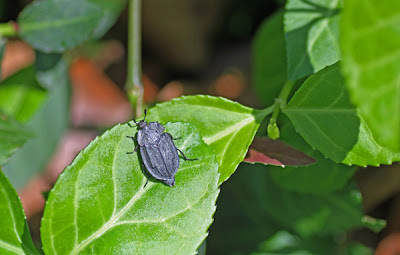 Ridged Carrion Beetles (Oiceoptoma inaequale) are native to Eastern North America and are usually associated with woodlands, especially near creeks or ponds. They are attracted to the scent of dead animals and show up within a few days after death occurs. As adults these beetles do not feed on the carrion itself, like their common name would suggest. Instead they are there to feed on the maggots that are feeding on the carrion. Blow flies are generally the first insect to show up on a deceased body, typically within hours of death. The larva of this beetle however, does consume carrion. It is not uncommon to find many types of insects sharing a single carcass. Species might include flies, rove beetles, carrion beetles, burying beetles and even butterflies all gleaning some sort of nutrients from the decaying flesh of some unfortunate animal. 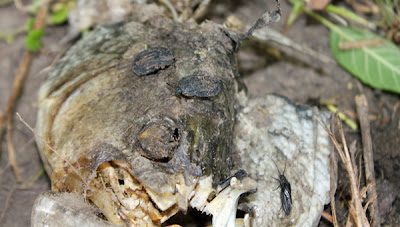 This species is black with raised (ridged) lines on the elytra. In flight the underside of the elytra are bright blue. Their flattened bodies are designed to allow them to maneuver underneath and through the dead bodies they spend much of their time traversing.

Mating takes place in the spring or late winter. Males may remain piggy-back on the female long after mating has taken place.

Females will lay eggs on decaying flesh. After eggs hatch the young will feed on the carrion. Once fully developed they will drop to the ground and burrow into the soil to pupate. Several weeks later the adults will emerge. There is usually one generation per season. Adults overwinter under leaf litter, under the bark of trees or in other secluded, sheltered areas. 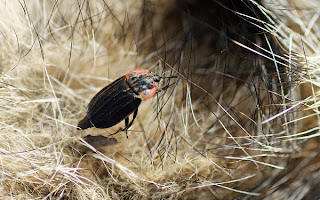