When is a spider not a spider? When it is a Harvestman (a.k.a Daddy Longlegs). These spider-like arthropods are in the order Opiliones. These arachnids are common to abundant in North America as well as worldwide with over 6500 species identified.
Most of us grew up playing with daddy longlegs, after all they were everywhere and easily captured and never tried to bite. Their long legs would tickle your bare skin as they climbed up your arm or leg which
was sure to bring on giggles or squeals depending on your reaction. As a naturalist I am blessed to work with children on a regular basis and I am often transported back to my own childhood when the groups of children who visit our trail are confronted with these charming creatures. Some are frightened, some are unsure, others are excited, but all are enthralled. Oh to be 4 years old again!

They get their common name of Harvestman from their frequency during autumn harvest. Truthfully it is during the fall that they are more easily seen as they are now adults and much larger. They also tend to aggregate in large numbers, sometimes dozens upon dozens along the foundations of homes. The common name of daddy longlegs comes from their protective tendency toward the females and eggs at mating time earning them the name of "daddy", not to mention the "long legs' compared to body size that they possess.
Native Americans referred to them as Grandfather Greybeard which meant Feet of Hairs. One could assume that this was derived from the legs resembling thin strands of hair.

Fossils dating back 400 million years ago have been found of this species in Scotland. Very little has changed in appearance with the daddy longlegs in all that time.

(Fossil image of Harvestman from 50 million years ago
http://en.harunyahya.net/harvestman-fossils-fossil-pictures/)

Harvestmen differ from spiders in several ways, but the most obvious will be the body shape and the eyes. Spiders have two body parts that include an abdomen and a cephalothorax (head and thorax combined into one) and daddy longlegs have one compact body part. Spiders have a cluster of eight or six eyes (depending upon species) whereas daddy longlegs have two eyes. They also have no silk glands, therefore cannot spin silken webs like spiders. Daddy longlegs also possess no fangs or venom unlike spiders which have both. 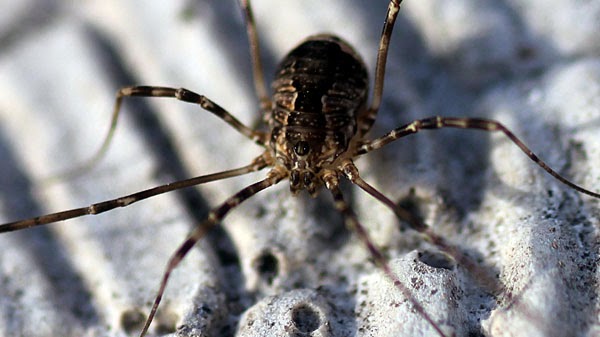 This lack of venom and fangs brings me to a myth that is commonly associated with this species. It has been said that these "spiders" are the most venomous of all spiders if only their fangs were strong enough and long enough to penetrate human tissue. There is no truth to this myth at all. First we must keep in mind these creatures do not have fangs so biting is an impossibility regardless if we had thin skin or not. They also possess no venom which makes them harmless. Handling them is completely safe and a great way to introduce young children to nature. Encourage your child or grandchild to handle them gently, no pulling off legs.

Other myths associated with this creature include the belief that they could help a cattle rancher locate lost cattle. If a cowboy in search of a wandering cow or calf could pick up a daddy longlegs by 7 of its 8 legs the remaining 8th leg left dangling would point in the direction of the lost cow.
It was also believed that if you killed a daddy longlegs it would bring rain the next day. This particular myth could be unfortunate for the poor harvestman. Thankfully this belief is not wide spread or passed along generation to generation or the common harvestman may find itself not so common any more. 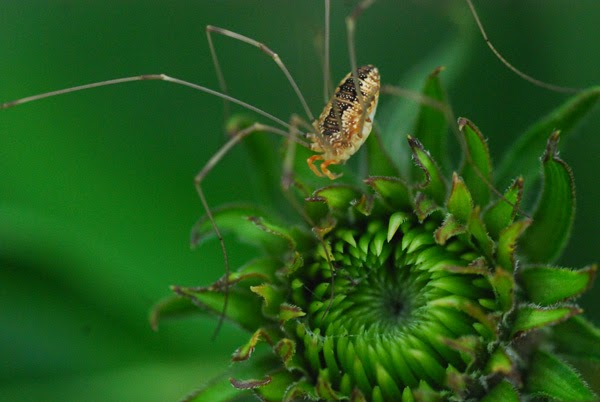 Without fangs and venom how does this species consume food? Like spiders they have mouth parts, but unlike spiders they do not need to dissolve their food in order to digest it. They can consume their food in small chunks. Their diet also differs from spiders in that they are often scavengers feeding on dead insects, plant matter, and fungi. Spiders are carnivorous and feed exclusively on other arthropods, unless you are a large spider (think tarantula) then you might feed on larger prey like mice, shrews, minnows or even birds. I've witnessed harvestmen feeding on a wide variety of insects, from flies to millipedes. They typically stalk their food using their sensitive second pair of legs to help them feel their environment. This is beneficial to a creature with poor eyesight like the harvestman. They are fastidiously hygienic and will clean their legs after each meal by passing their legs thru their mouth effectively "washing" them. Momma longlegs must be proud. 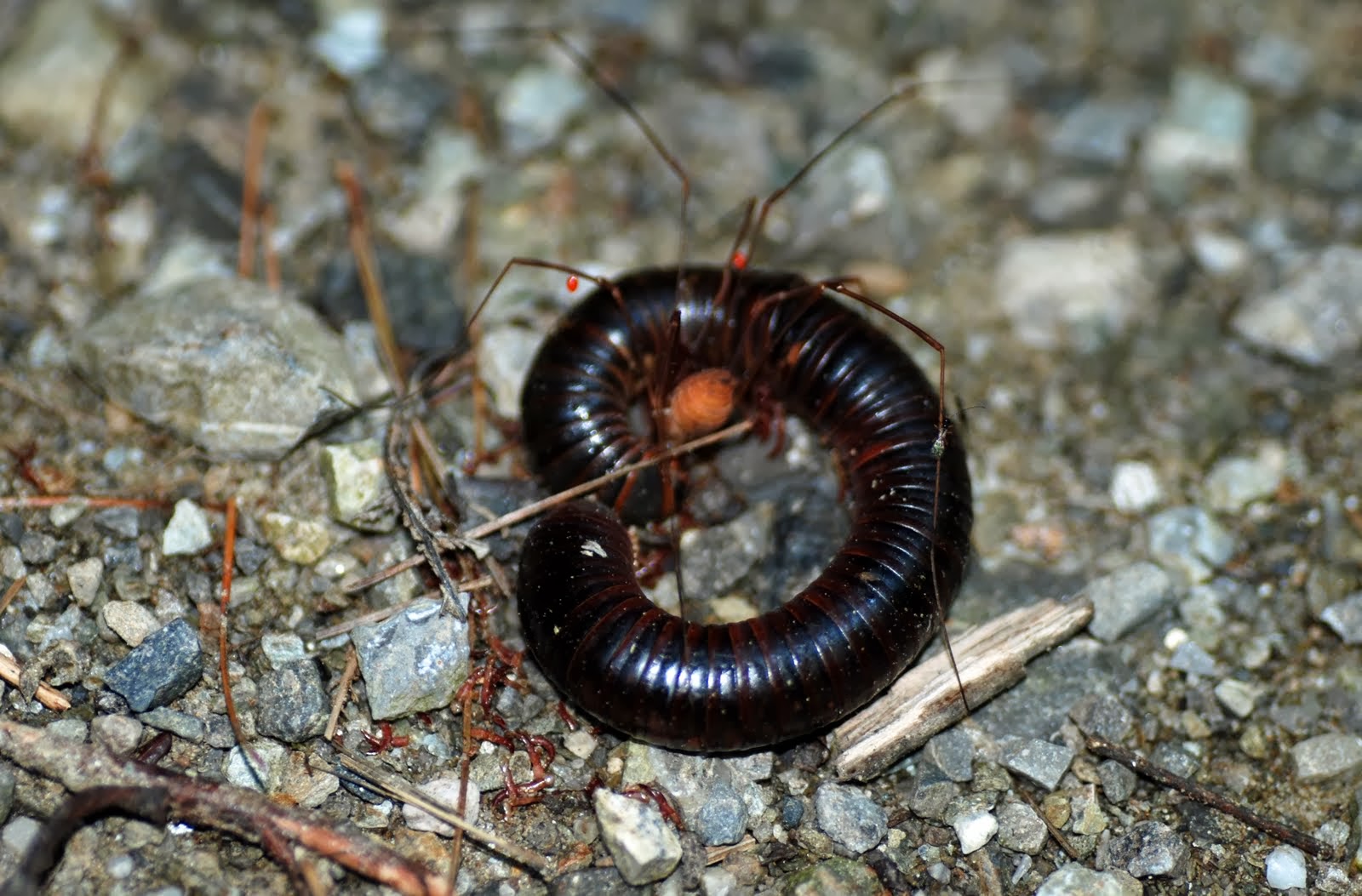 (Feeding on a dead millipede. You will also notice tiny red mites on the legs of the daddy longlegs) 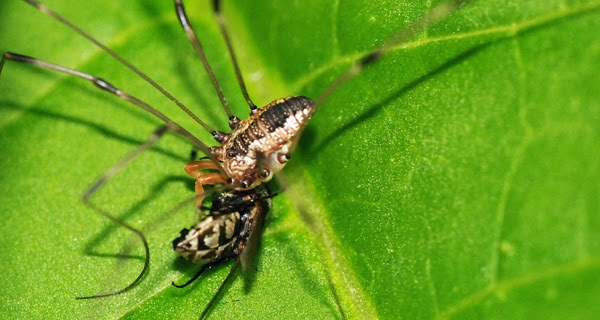 (This daddy longlegs captured this fly and ate it)

After mating, the female will lay eggs and in many species the males will guard the eggs and protect them from potential predators. The male will clean the eggs  and guard the nest until the eggs hatch. It may take from 20 days to 6 months for them to emerge depending upon species and climate. Once they have hatched the young will go through 6 molts, or instars before reaching adult size. Although some species may go through 8 instars to reach maturity.

Harvestmen have several defenses, including the ability to emit a foul smelling odor from special glands in their legs when disturbed. If bothered by a potential predator many species may also play dead, or detach a leg that will continue twitching which can distract the predator giving the harvestman enough time to escape. Some species will bob their bodies which may also confuse a predator. Escaping a predator is not always that easy and many fall prey to various creatures like other arthropods, birds, and lizards. 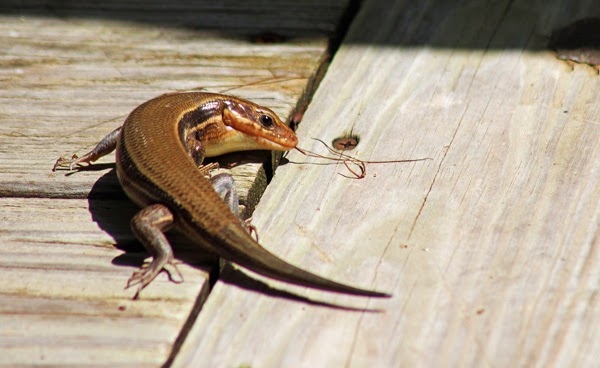 While daddy longlegs may have some success in warding off potential predators by using distracting measures there are some different types of predators they cannot avoid and those are mites.These mites act as a parasite on the daddy longlegs. They seem to have the same affect on the spider as ticks would have on mammals. In large enough numbers the mite-parasite will destroy the host. The one photographed below was well on its way to deaths door due to mite infestation. It was wobbly and ungainly, unable to keep its balance. It was quickly succumbing to the onslaught of mites. 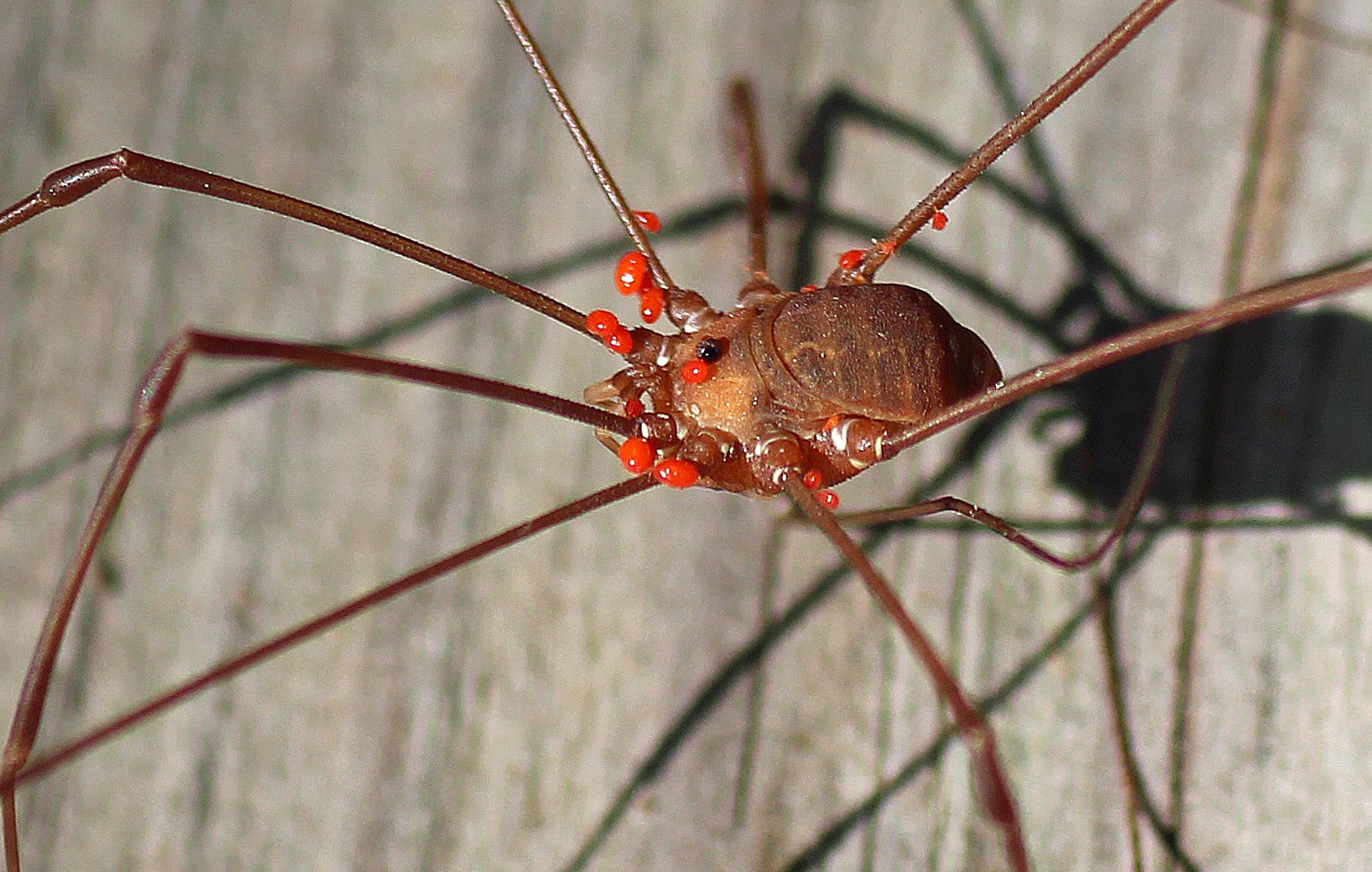 Each person will have a different reaction to these arachnids. Some will cringe in fear as their arachnophobia is triggered by a creature that looks enough like a spider to be one. Others may find them creepy or disgusting as unfortunately many people do when faced with any 6 or 8 legged creature. Still others may find them comic or fascinating. Whichever category you fall into keep in mind these harmless creatures are beneficial to our yards and gardens. They consume dead or dying arthropods, may even consume the dead flesh of carcasses. They feed on dung, plant matter and fungi, turning their diet into organic matter that benefits soil and garden plants. These endearing spider-like creatures are also reminders to us of a simpler time in our life. The time of lightning bug lanterns, ladybugs, and daddy longlegs the gentle spider of our youth. 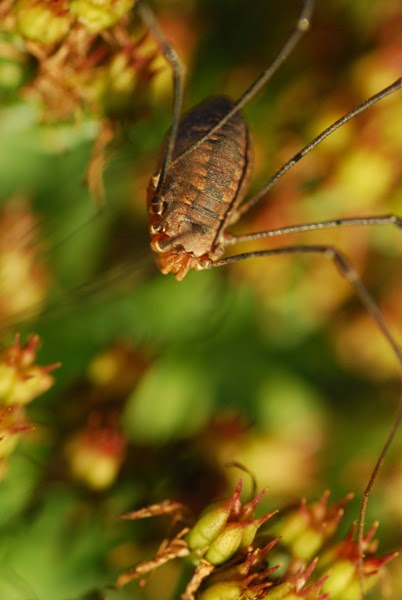