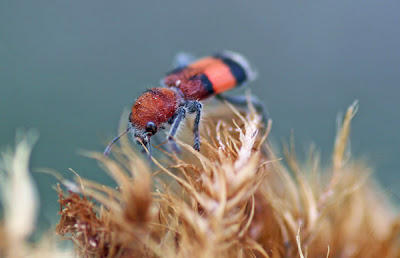 Checkered beetles in the family Cleridae are common throughout the United States. They can be found in a wide variety of habitats and typically feed on other beetles and their larvae. Some will scavenge for food and still others will feed on pollen.

These little beetles are usually brightly colored like the one pictured here which was photographed in my backyard. This particular species the Orange-Banded Checkered Beetle (Enoclerus coccineus), is very common in Missouri and ranges from New Mexico to Minnesota. Their small size often causes them to be overlooked by the average person. In spite of the fact that they are common, they are still rarely seen. I've only ever encountered three of these beetles in the last 5 or more years. Clerid beetles are small beetles that range in size from 3mm to 24 mm.

Mating takes place while the female is eating. She requires appropriate energy for egg production. After mating, females will lay eggs under the bark of trees. It can take from 3 months to 3 years for the offspring to complete their lifecycle. This is dependent upon species, and weather. Warmer temperatures will speed up development. If temperatures drop below the threshold tolerance it will delay development. The offspring are voracious hunters and capable of finding and feasting on the larva of bark beetles. This appetite has earned them favor among individuals in favor of biological control of pest insects. These beetles are used to control bark beetle populations in certain areas where they are posing problems for woodlands. 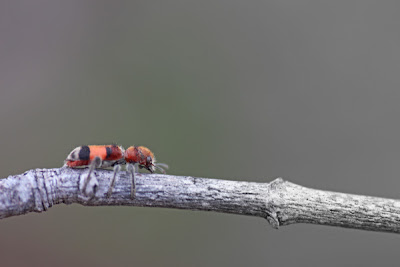 Some species may be beneficial to forensic science, even if in a limited capacity, due to their habit of showing up on dead or decaying bodies. Unlike many other insect species that are attracted to decaying flesh which show up in the earliest stages of decay, clerid beetles frequently are found in the later stages of decay.Which may make their appeal somewhat limited to forensic scientists.
Still other clerids are found among dried, smoked and stored meats and can cause infestation issues.


There are somewhere around 3,500 species of clerid beetles found Worldwide, with 500 species found in 37 genera within the United States and Canada. Most are similarly shaped with elongated bodies, covered in bristly hairs and bright colors and patterns.

For another great article about this species visit Beetles in the Bush.