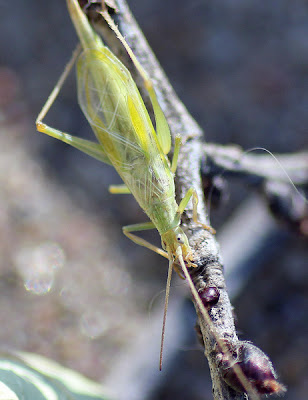 This pretty, lime green cricket is the Four-Spotted Tree Cricket (Oecanthus quadripunctatus), which is a cricket belonging to the family Gryllidae. There are 17 species of tree crickets within this family and many are difficult to distinguish from one another. All are small, usually 1 inch in length or less. This particular tree cricket is the only known species to occur in all 48 contiguous states. The other day the temperatures warmed to nearly 60 degrees and I kept hearing a cricket calling in a bush outside our front door. I investigated the bush, only to discover the cricket had become quiet. I walked away and then heard the cricket again, back to the bush I went and again it was quiet. I approached the bush no less than a half dozen times only to be rebuffed by this boisterous cricket by sudden silence. I was determined at this point to find this tiny little singer and see if I could identify it. I suspected by its sound that it was a tree cricket, but which one? I sat on the ground next to the bush and did not move, did not make a sound. It worked! The cricket began singing in earnest. I slowly moved my head toward where I thought the sound was coming from and suddenly noticed what appeared to be tiny leaves vibrating against a limb in the bush. Those tiny shivering leaves were the buzzing wings of the little cricket I was searching for. I was in awe of this hearty little insect. We have had numerous heavy frosts and a light freeze up to the day I discovered him in the bush. I could not imagine how he had survived such harsh temperatures. Not only had he survived but seemed invigorated by the cold spell and sudden warm weather. Was he confused? Did he think winter had already passed and it was time for thoughts of love? Was he singing for a lady friend? Was he singing to advertise food? Or was he just happy to be alive? I guess we'll never know, after all how can we know what the tiny little brain of an insect thinks, or even if it thinks at all? 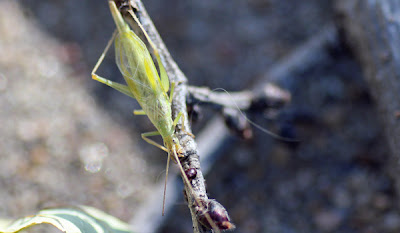 Once I spotted the cricket and had taken some photographs I was uncertain which species it was. At first I suspected it was a snowy tree cricket, but wasn't 100% convinced, it somehow sounded different than the other snowy's I had previously heard. It didn't look quite the same either. I submitted a series of images to bugguide.net and received an answer within days that this was a Four-spotted tree cricket. Apparently they have a series of dark spots on their antennae that gives them their common name. I however did not notice these spots nor did I even know to look for them as I had never heard of this species before now.

After reading a little about this species I learned that they typically hang out close to the ground in vegetation, usually three feet or less up in a bush, grasses or other plant. The one I photographed here was approximately two feet off the ground in the center of the bush well hidden from prying eyes.
They are found along roadsides, in open fields, old pastures, and in crop ground.

Mating takes place in autumn, usually in September and October. Males will find a vantage point in a bush or shrub and call loudly a love song that is sure to appeal to any nearby females. She will lay eggs in the ground soon after mating and the eggs overwinter in the soil. Young hatch in June when the soil temperatures signal warmer weather and available food sources. The young are hatched looking very much like the adults only lacking wings. As they age and grow wing pads become visible. By August or early September the offspring are now full grown adults and ready to mate and continue the cycle.

While I am not a fan of winter and grumble through the cold temperatures like a grumpy old lady.....longing for warmer weather and sunshine. I relish warm winter days when a few hardy insects find the sunshine and warmer temperatures too hard to resist. I don't even mind the wayward Asian lady beetle or boxelder bug that makes its way into my house, at least it is a sign of life on an otherwise dismal landscape.

Sing on little cricket before the weather becomes more than your little body can endure. 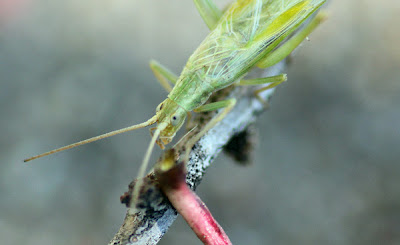