Yesterday was a beautiful warm sunny day with a high of 65. Unfortunately I was stuck in my office until 5:00; at which time the clouds rolled in and the temperatures had cooled considerably. While unlocking my car, a honey bee, did a fly-by, perhaps attracted to my bright yellow car, did it look like a big daisy to her? I was so excited by the first honey bee of 2010 I could hardly wait to get home and explore. By the time I got home it was 50 degrees and a wind had picked up. Not to be discouraged, I decided to roam around the yard anyway to see if I could find any six or even eight legged creatures.
The first to catch my eye was this Blue Bottle Blow Fly, while flies might not be everyone's cup of tea, I can't help but appreciate their single-minded devotion to populating the planet. 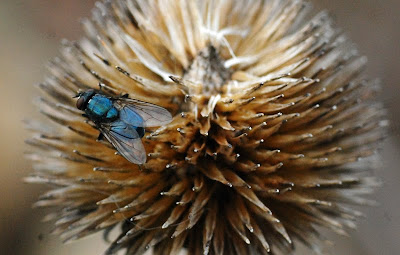 The second insect, or rather insects to fall under my gaze were these Multi-Colored Asian Lady Beetles. I always wondered where they go when they aren't invading our homes in the fall. These two pictures will answer that question..... 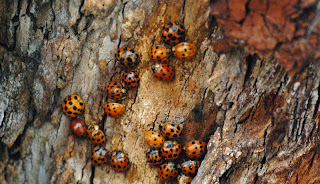 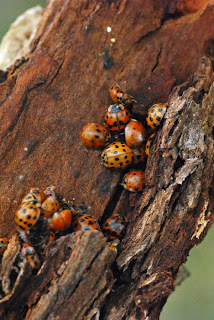 Apparently they hide under the bark of decaying trees, like this old Elm Tree. I discovered much of the bark loosened and proceeded to peel it off to see what would present itself underneath. I found a goldmine in insects hiding under that bark, away from winters fury.
Among the Multi-Colored Ladybugs were also these little black ants. They had dug a series of intricate tunnels throughout the layer just under the bark. There were some winged individuals, as well as wingless ones. There were also some little yellowish things in a tiny cluster that looked mysteriously close to eggs. 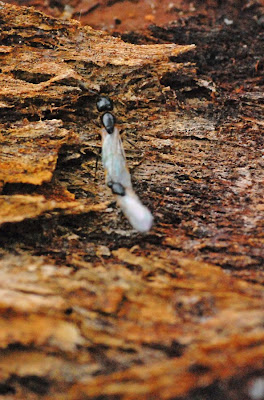 Next I discovered an eight-legged critter. This was a tiny crab spider that so completely blended in with the tree bark that I almost didn't see him. He was about 3/8 of inch long when his legs were stretched out. 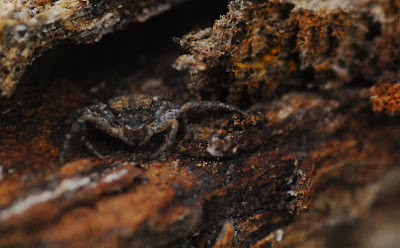 Crab spiders are among my favorite spiders, second only to jumping spiders. They are so crazy looking, it is hard to be scared of them. 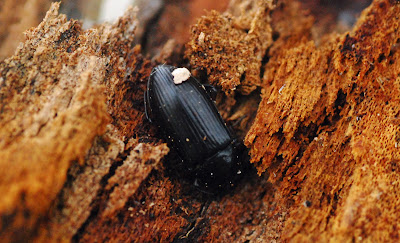 Then I uncovered this small black beetle. I have a very hard time distinguishing one small black beetle from another as they all look so very much alike. I would be hard pressed to try and ID this one.  I'm sure it is some kind of little "Ground Beetle" that just found a secure place to overwinter. 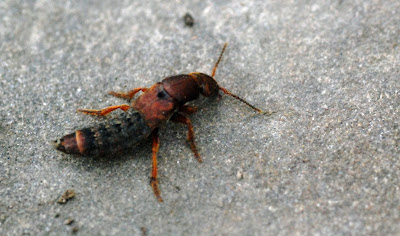 This fascinating looking insect is a Rove Beetle. I believe it to be Platydracus cinnamopterus, and just for fun we will call him/her the Cinnamon Rove Beetle, he/she is delightfully cinnamon in color. I found this interesting beetle while turning over rocks. He wiggled and tried to escape, but I wasn't to be outdone. He finally gave up and played dead, which allowed me to scoop him up and place him onto of a stone for a photo. After having tolerated his harassment at the hands of moi, he scurried off the rock and into a crack in the soil quicker than you can blink an eye. It just goes to show, even on cooler, chillier days in early spring there is still interesting bug life to be found. Tear off some bark, turn over some rocks, sift through some leaves or just sit patiently and you will be amazed at what you will find.
Posted by Shelly Cox at 5:28 PM