Now I know you are all wondering why I am posting a snake here instead of an insect or other tiny little garden creature without a backbone, but I couldn't resist introducing you to the Midland Brown Snake. This adorable, yet tiny snake is native to Missouri. They are approximately the length of a ruler, ranging from 11-14 inches when fully grown. They are a lovely shade of milky brown with speckling on their sides and a lighter colored stripe down their back. The one pictured here is a female, how do I know that? Well let me explain. 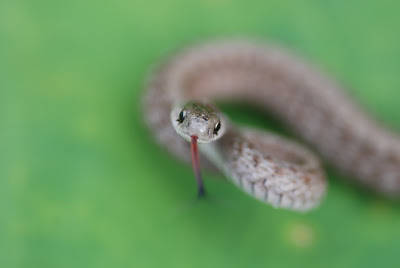 My husband had put up hay last year and discovered this little snake within the hay bale. Knowing my love of all things creepy and crawly he brought her to me in his leather gloved encased hand (after all a snake this tiny might bite...LOL). I thought she was the prettiest little thing I had ever seen and decided to keep her, at least for a little while. I placed her in a large tank, provided her with water and proceeded to try and figure out exactly what species she was and what she would eat. I learned she was the Midland Brown Snake and they feed on slugs and earthworms (gotta love that). I placed a few tiny slugs and worms in her enclosure but she turned her nose up at them. After a week of refusing to eat I made the decision to let her go. I awoke early one Saturday morning and went down stairs to retrieve her and let her go....and got a huge surprise. She had given birth to 10 babies overnight. Eight of them were wiggling around in the cage all over her. Two of them were still encased in their embryonic sacks. I carefully peeled those sack away and preserved the two dead specimens to use for school programs. It isn't very often you get to see a newborn snake. I knew my students would love to learn about them. The remaining snakes were taken outside so I could snap these photos. When I reached into the container, I got another surprise. This seemingly docile snake turned into the Mother of the Year with her aggressiveness towards me. She lunged and bit at me. She was displaying obvious protective tendencies toward her offspring. 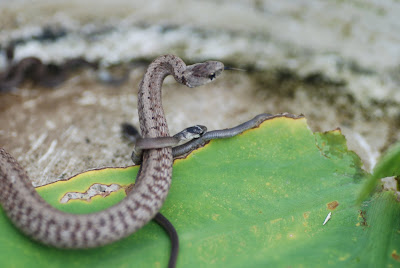 When we think of reptiles we often think of cold blooded, calculated hunters incapable of feelings. I'm not sure she was experiencing any kind of maternal love for her prodigy but she certainly felt compelled to keep  me at bay. It is funny to me, how a snake barely a foot long, that does not possess venom, and has no real ability to hurt you can still make you jump when it lunges for you.....LOL. I took pity on her and released her and the babies to my garden. Where they can feast on the ample supply of slugs and tiny earthworms that reside there.
Posted by Shelly Cox at 12:09 PM