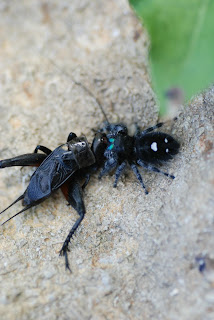 I had to laugh when I spotted this little scene playing out last summer in my back yard. This gorgeous Daring Jumping Spider had "grabbed" herself some dinner. For all intents and purposes it looks as if she had eyes bigger than her stomach. That huge cricket was much larger than her. After watching her for quite sometime she appeared to have things well in hand...or legs. I approached her slowly so as not to disturb her. Very cautiously I inched towards her. Now this whole time she is fixated on her prey and apparently either unaware I was there or unconcerned. Then things suddenly changed, seems I invaded her comfort zone. At about 4 inches away she bolted, cricket and all, around the rock and under it in a matter of seconds. I guess she thought she was going to have to fight to keep her juicy cricket. I tried to reassure her I wasn't hungry, but all to no avail....she refused to come back out. These spiders are some of the most beautiful in the animal kingdom, and with their habit of jumping at you they can be intimidating. Ok....maybe they aren't jumping AT me, but it certainly seems that way. Regardless they get their point across and I beat a hasty retreat. Funny how something so small can make me give up my post, and move on to more friendly surroundings, after all I bought the house! Just let one of these furry little beasts find it's way to the ceiling in my house, my daughter refuses to go to bed until it has been removed. This little spider measuring barely a 1/2 inch in length will have my 5'2" 100 lb. daughter forming a sit-in and not budging until the interloper has been removed from the premises. I admit to being a little skittish when I approach a spider, there is something so darn scary about spiders. In the same token I am fascinated as well and even bought a baby tarantula. I was hoping to overcome my fear. Then the unthinkable happened the darn thing escaped! Now I have a baby tarantula residing in parts unknown in my house, making himself at home. I am waiting for the day when it ends up in the middle of my chest, at night, in bed, all full grown and hairy! (Remember that episode of the Brady Bunch?) As long as it doesn't show up in my daughters room, it will be spider fricase'
Posted by Shelly Cox at 11:01 AM