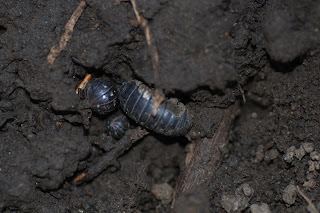 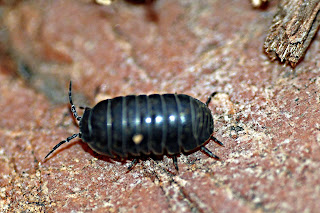 Many people mistakenly believe that these little prehistoric-looking creatures are insects. Insects possess 6 legs, whereas these little armored tanks have 7 pairs of legs. In fact they are land crustaceans and are more closely related to shrimp, lobster and crayfish. I've heard of people who cook them and say they even have a seafood type smell much like shrimp. As children we often referred to them as "ball bugs" or "Roly Poly's" from the habit they have of rolling themselves into little balls when they feel threatened. Not every species has this unique ability, but the one pictured does. This armored covering gives them a certain amount of protection. Even their Genus name of Armadillium hints at a land mammal we all are familiar with and that is the Armadillo. Just look at the outer shell and you can see without much imagination the similarities. They vary in color from light gray to a very dark gray. Most species of these little creatures are aquatic, but many have adapted well to life on land by hanging out in moist areas, such as under rocks, under leafy vegetation, or bark. They breathe through gills, which means survival without moisture would be impossible for them. Often times they will find their way into our basements, although they pose no health risk to humans, it could mean that you have humidity problem in your basement. Too much moisture is great for them, but bad for our homes. They therefore are an indicator to us of other issues involving our structures. They have an unusual life cycle. After mating, the females will carry the eggs around in a special pouch on her lower abdomen, when the tiny offspring hatch she will "deliver" her babies in what appears to be live birth. They live on dead decaying plant and animal matter, algae, moss, and bark. In greenhouses they will live off the plants, in large numbers they can be detrimental to greenhouses. These bring back fond memories of my childhood. Many a summer day were spent in fascination of these little critters. I used to turn rocks over to see what was living underneath, and was never disappointed by the large numbers of these that were present. Depending upon what part of the country or even the world you are from they go by many different names. One of the most charming is the title of this blog, but many other names are fun as well. Including: Pill Bug (which I assume comes from the fact that these bugs are high calcium carbonate and were used to treat tummy aches in some parts of the world), also sow bug, ball bug, armadillo bug ( I can see that), potato bug, roly poly, and doodle bug. These little creatures are a great way for kids to explore the world of Arthropods, they do not bite, they aren't overly large or intimidating, and when they roll into a little ball they are sure to charm your kids much like they did me so long ago.
Posted by Shelly Cox at 9:58 AM