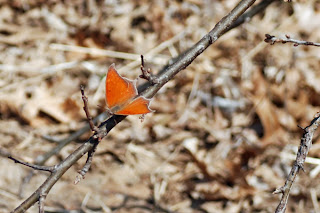 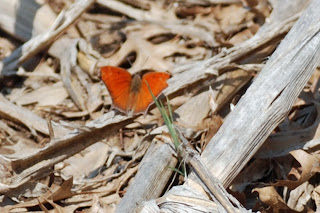 This beautiful orange butterfly is the Goatweed Leafwing. They range throughout the eastern and southern Midwest states and Southwest portion of the United States, in New Mexico and Texas. The adults feed on sap flows, dung, bird droppings and rotting fruit. The caterpillars host plants are Goatweed, Texas croton, prairie tea and other plants in the spurge family. They have a very erratic rapid flight. This makes them very difficult to photograph (hence the poor quality of these photos) They land for a mere second then off they go as soon as you get anywhere within camera shot. It is like they do it on purpose. I was able to see this one (pictured) and its mate engaging in their mating behavior. I watched them for quite some time as they spiraled high into the sky together, then quickly plummet back to earth, and separate. Then they would find each other again and repeat the process. I never actually saw them mate, seems they saved that for a more private time when prying eyes weren't around. These butterflies are not commonly seen. I think it is their erratic flight, and the fact that when resting with their wings folded they look so much like a dead leaf it would be hard to see them unless they moved or flew. Their populations are secure throughout most of their range. They are lovely butterflies,and that orange color really is as vivid as it appears in the pictures. I will keep trying to get better pictures, apparently we have a host plant on our property where I took this picture because they never strayed far from the spot where I photographed this one. I will have to try and find the host plant and hopefully with it the caterpillars.
Posted by Shelly Cox at 9:22 AM