A Tiger with Spots? 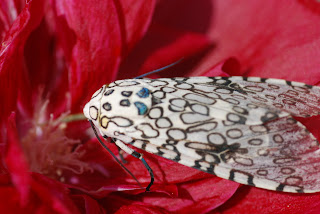 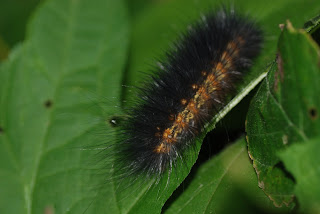 This gorgeous Tiger Moth is the "Great Leopard Moth" (Hypercompe scribonia) They are one of the largest of the Tiger Moths. They have very distinct coloring. An all white moth with large ringed spots in black, the back of the head features two beautiful blue spots. They have blue antennae, and their abdomen is beautifully marked with orange and blue spotting. The caterpillar is one of the infamous "Woolly Bears" that are often seen in the fall, in the case of this moth the caterpillar is all black with reddish skin. They will overwinter as a caterpillar and become active again in the spring with the return of warmer temperatures like other "woolly bears". They seek out their host which include a large variety of plants, such as cherry, dandelion, plantain, violet 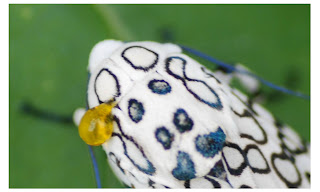 , willow, maple as well as numerous others. They will eat for a week or two until their full size is reached then they will pupate. It will take them a few weeks to complete the entire process. These moths are unique in that they have a defense mechanism in the from of a yellow discharge from their eyes. When approached by a would-be predator they will excrete a yellowish substance (pictured), it is distasteful to birds and other animals that would try to dine on this lovely moth. Most moths in this family (Arctiidae) are unappetizing to birds. This one was photographed last summer on a hollyhock bloom. I found several of this species near our timberline where I had a mercury vapor light set up by a large white sheet. When I touched it, it demonstrated its defensive eye discharge and I was able to get a picture of it.
Posted by Shelly Cox at 4:50 PM