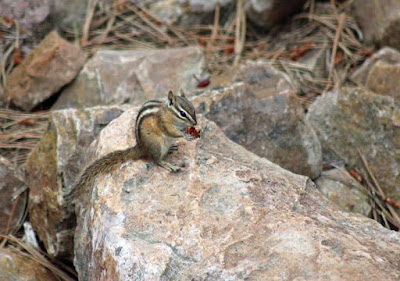 On a trip to South Dakota, near a woodland where we had rented a cabin, we began noticing tiny chipmunks running all around the grounds near where we were staying. Every trip out west is sure to bring with it sightings of chipmunks, and this trip was no different. These small, quick moving, agile chipmunks are called least chipmunks and are the most common of all chipmunks in their range. They are found throughout the great plains, westward to California and in many northern states. Least chipmunks are the smallest of the chipmunk species found in the United States, females may reach lengths up to nine inches (including the tail) with males being slightly smaller.

Their color varies from grayish to reddish-brown with a cream or white underside. There are five brown or black lines separated by four cream or white stripes running down their back. Two light and two dark stripes run from the tip of the nose through the eye and the top of the head. The bushy tail is orangish-brown. These hyperactive rodents are found busy gathering nuts, berries, seeds, and insects during the daylight hours. Because of their diurnal habits exposure to nocturnal hunters like owls, foxes, raccoons, weasels, and other predators is minimized. Although animals such as hawks and snakes, that are active when chipmunks are scurrying around, will still snatch one for a quick meal when they can. And when I say quick, I mean it. These speedy little chipmunks can run at speeds up to four and half miles per hour! They are not only fast, but they are also great climbers and jumpers, so any predator bent on a least chipmunk meal is going to have to work for it.] 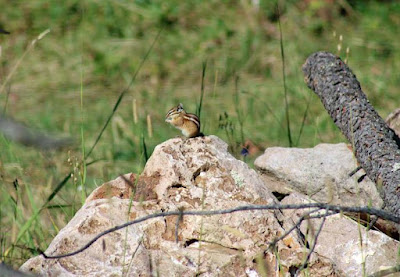 Chipmunks, like many rodents’ store food for use during winter and other times when food might be scarce. They use specially adapted cheek pouches to stuff food into for transporting to hidden caches under logs, rock piles and in tree cavities. Because their favored foods are tree nuts and seeds, they are considered seed dispersers and help transport seeds and nuts to new locations thus expanding the range of many plants and trees.

These little chipmunks are not true hibernators like bats, and other mammals. Instead, they enter into a type of slumber called torpor. They will slow their metabolic rate and reduce their body temperature, which reduces their need for food. They do not pack on fat like other animals do before a long winter of hibernation. Many times, during the winter they will wake up and seek out their caches of food for a quick meal and find water if available before going into a deep sleep again. When spring returns, they are active again. On cooler days, these little chipmunks often climb trees seeking out a higher vantage point to bask in the sun and warm themselves.

The biggest challenges facing chipmunks are human activity. This comes in the form of habitat destruction as well as poisoning and trapping. Many people consider chipmunks pests and target them much like other rodents. However, least chipmunks pose no significant issues for humans, other than maybe in campgrounds where they tend to beg for treats in a form of conditioning. Who hasn’t tempted a chipmunk closer to them with a tasty peanut or piece of granola? Once a chipmunk associates a human with an easy food source they will hang out where the humans are. 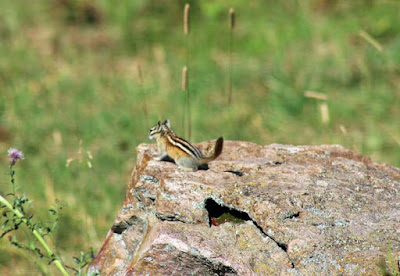 The Iroquois tribe talks of how the chipmunk got his stripes. Back when the animals were in charge of making big decisions such as whether we should have eternal night or night and day, the bear being the biggest and the strongest of all animals climbed to the highest mountain. Deer, raccoon, chipmunk, wolf, and many others followed. On top of the rocky, treeless mountain the bear growled in his strongest voice that the world should have only darkness. The Wolf and raccoon, being too scared to do otherwise, agreed with bear. However, the tiniest animal of all, the chipmunk spoke up against the bear. He wanted there to be both daylight and darkness. The bear grumbled, and growled, and said, “No! Darkness only!” The chipmunk continued to chatter and talk and kept the bear so distracted all night long that the sun began coming up in the East. The other animals having never seen a sunrise before were mesmerized by the beauty. The bear realizing what had happened was angry at the chipmunk and quickly chased him down the mountain. Bear was fast and reached out with his giant paw, but chipmunk got away, although not before bears long claws scratched his back. To this day you can see the stripes on the chipmunks back. 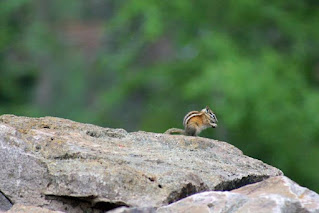 These spunky little rodents are one of my favorite mammals, and no trip out west is complete unless I spot one. These small chipmunks are not only cute but provide much needed nutrition for a variety of predators. They disperse seeds and contribute to increasing the range of many plants. Their antics are entertaining and fun to watch making any camping trip or hike in the woodlands more enjoyable. Sometimes just taking time to appreciate the smallest things bring the biggest joys.
Posted by Shelly Cox at 9:31 PM