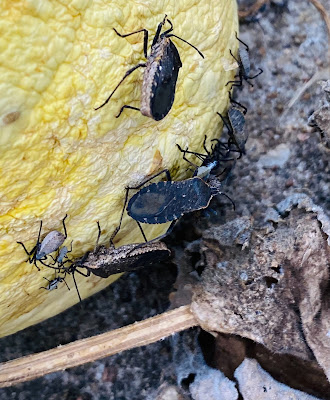 A few months ago, I noticed a pumpkin vine growing alongside one of our buildings. I had not planted it but recalled throwing a couple of pumpkins out last winter in that area. These voluntary pumpkin vines grew, bloomed, and started producing beautiful white pumpkins. I was excited by the prospect of having pumpkins I grew, even if by accident, to add to my fall décor. I was especially excited by the idea considering each year that we purposely planted pumpkins they did not develop beyond lots of leaves, and vines, rarely any fruit. Now it appeared I was accidentally successful. The pumpkins got bigger, and my anticipation of beautiful, large pumpkins grew right along with them. Until the unthinkable happened! The scourge known as squash bugs found my one-and-only vine. They descended upon it like a hungry plague of locusts. One day all was well, a week later an infestation! I was able to rescue three not quite fully developed pumpkins before the vines withered and died.

Squash bugs in the family of leaf-footed bugs are the bane of pumpkin and squash growers everywhere. As adults they spend the winter in leaf litter, under rocks, ground debris and even inside buildings waiting out the cold. When spring returns the females seek plants in the cucurbit family which includes pumpkins, squash, cucumbers, and melons. Typically, they will mate in May or June and lay small clusters of about twenty eggs on leaves between the veins where a V is formed. Occasionally they will lay eggs on the stems of the plants. Females are capable of producing up to two hundred and fifty eggs each season! The eggs hatch in about ten days and the young will reach the adult stage in four to six weeks. Young nymphs are light green in color with a black head and legs. Adults are about five-eighths of an inch in length, and brownish to gray in color with alternating orange and brown stripes on their abdomen. Their hind legs are noticeably thicker or wider than their other legs, giving them the name of leaf-footed bugs. They are often mistaken for stink bugs. Whereas they are in the same order of true bugs, they have a more shield shaped body and squash bugs are more elongated. There is usually one generation per year, but in warmer climates they may produce a partial second generation that does not complete its lifecycle to the adult stage. These late growing nymphs will die when the temperatures drop below freezing. Typically, life stages overlap, and eggs, early nymphs, older nymphs, and adults will be found together. 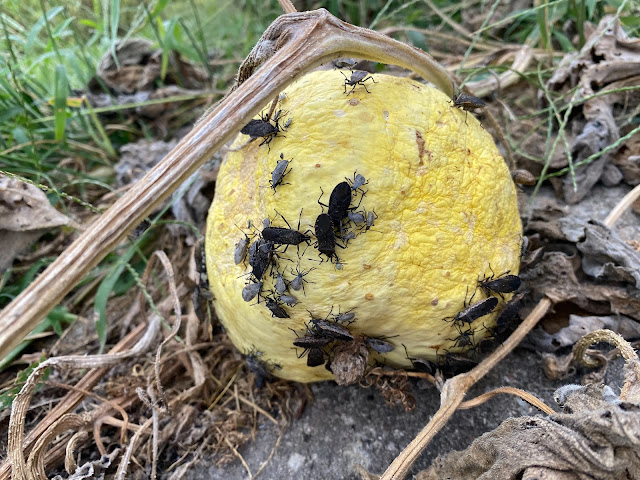 Squash bugs in the order Hemiptera, are classified as true bugs with piercing, sucking mouthparts. In the case of these bugs, it is believed they use their mouthpart, called a stylet, to inject an enzyme to break down plant tissue making it easier for them to slurp up the liquified plant matter. The repeated mouth jabs and toxin injection damages the inner vessels of the plant that carry nutrients and water to the tissues. You will notice a distinct yellow spotting of leaves that eventually turns brown giving the leaves a mottled look. In older sturdier plants this feeding activity is generally not a huge issue for the plant, however huge infestations will create a situation where the plants are overwhelmed and may die. Young seedlings and small vines are easily overtaken by the feeding of these bugs and often do not recover. It was believed that squash bugs did not carry pathogens or diseases to plants, that it was the feeding activity alone that caused the damage. Recently a disease has been associated with the squash bug, cucurbit yellow vine disease (CYVD) it is harbored in overwintering adults and passed to the plant in early spring. This pathogen causes rapid yellowing and wilting and kills the plant, thus quickly decimating your crop. 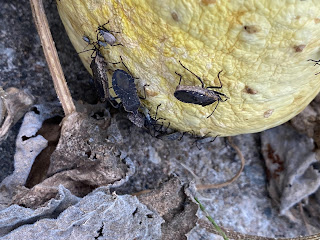 How can you protect your crops from an onslaught of these tenacious pumpkin loving munching machines? Keep your plants healthy and strong by fertilizing and watering regularly. Strong, sturdy plants are less likely to be affected by the feeding habits of these bugs. Be diligent in checking your plants once or twice weekly. Each time you find eggs, crush them. Nymphs and adults should be crushed or thrown into a bucket of soapy water. This can be challenging as their instinct is to hide under leaves when disturbed, often going unseen. You can trap squash bugs by placing cardboard, plyboard, or tin along the garden or near the plants. They will use this refuge to hide under at night. In the early morning you can scoop them up and dispose of them. Remove plant debris during the growing season to reduce areas where they can hide. Clean up your growing area each fall to eliminate areas where they can take refuge in the winter. Rotating crops each season will also help in reducing the number of squash bugs that find your plants. All of this sounds like a lot of work because it is but using chemical control has limited effect on squash bugs. Adults have an unusually high resistance to the chemicals available over the counter to the average gardener. If you notice leaves yellowing or wilting early in the growing season the only option may be insecticides. If this is your only recourse for controlling them, target the nymphs, rather than the adults, as they are more susceptible to the chemicals and your chance of success is greater. Apply your insecticide in the early morning or late evening hours when there is limited bee activity. Remember your chemical is not only going to kill your target pest insect, but also your beneficial ones. Always follow the instructions carefully. You may be tempted to apply more thinking it will be more effective. This is not the case; in fact, it rapidly creates resistance in insects causing bigger headaches down the road.

After picking my three precious pumpkins I relinquished the dying vine and one lone wilted pumpkin to the squash bugs. With due diligence, some patience and hard work on your part it is possible to stay one step ahead of these little pests.