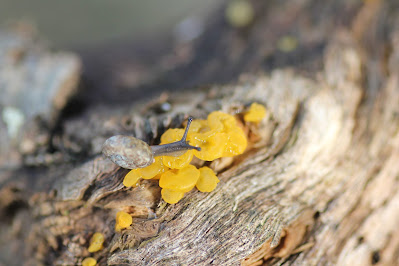 When we think of parasites, if we think of them at all, we typically don’t consider mushrooms within that category of ilk. The truth is most mushrooms are parasitic in nature and aid in the break down of organic matter. One of my favorite mushrooms to find when out hiking is witches’ butter. These vibrant yellow mushrooms go by many different names including fairy butter, buttercups, and yellow brain fungus to name a few. Their scientific name is Tremella mesenterica and in Greek translates to “Of the middle intestine.” Like all mushrooms they lack chlorophyll and instead get their nutrients by feeding on plant and animal matter. There are three types of witches’ butter, two are vibrant yellow and one is orange. The yellow varieties feed on other fungi presents on hardwood trees. These “other” fungi usually appear as a scabby growth on the bark of the trees and are working as a decomposer to turn the tree into organic matter that will benefit the forest floor. This essentially makes witches’ butter a parasite feeding on a parasite. The orange variety is found on conifers like pine and hemlock and does not feed on other fungi, but rather acts a decomposer of the trees themselves.

These mushrooms are classified as jelly mushrooms, and if you have ever encountered one it is easy to see why. They have a slimy, rubbery texture that bounces back when touched. It may be this slimy exterior that earned them the common name of butter, as the texture is reminiscent of margarine. They are considered edible, but not a favorite to forage due to their lack of taste. Face it anything with a common name like “yellow brain fungus” and a scientific name that literally translates to mean intestines, doesn’t exactly entice one to partake. However, what they lack in taste they make up for in texture and are often added to soups as a nutritional filler. Some people claim they bread and fry them, and they resemble calamari in taste and texture. Maybe I will give this a try in the future, I do love calamari. 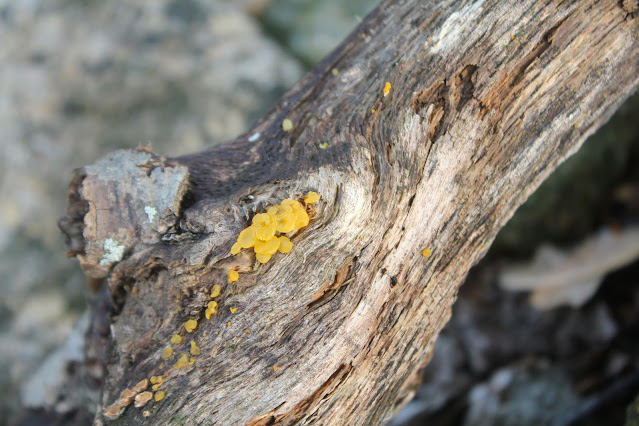 They are often referred to as the survival mushroom as most foragers agree they are edible in the raw state. However, keep in mind this not true for nearly every other mushroom. All mushrooms should be cleaned and cooked before consuming. Even with this particular species caution should be used when considering consuming them in the raw state as each individual may react differently. I read a story about a grandmother who foraged with her granddaughter. The little girl was drawn to the witches’ butter and after getting permission from her grandmother would consume them raw on each outing into the woods. This went on for years and the little girl had no ill effects from partaking in these flavorless mushrooms. They however could not figure out why she felt compelled to eat them, until it was later revealed at a doctor’s appointment that she had respiratory problems. It is known by the Chinese that witches’ butter is good for breathing issues, as well as for your immune system. Studies are now showing promise as potential treatments for diabetes as well. Could it be this young girl was experiencing a form of pica that caused her to crave the very mushroom that could treat her breathing issues?

After heavy rains the bright yellow fruiting bodies will appear on downed logs or decaying trees in deciduous hardwood forests. They are only present for a short time and soon dry and shrivel into a reddish-brown mass that blends in well with the bark of trees. Rest assured though, as soon as the rains return so too will the yellow jellies. The purpose of these jelly-like masses is to send spores into the wind to spread the mushroom to other locations. There aren’t any other mushrooms that look quick like the gelatinous, convoluted clusters that is witches’ butter. They grow in tiny masses about a half to one inch in diameter. These mushrooms may be found at anytime of the year, including winter if there is sufficient rainfall and moisture. It is a welcome sight on the drab winter landscape to find these sunny colored mushrooms. 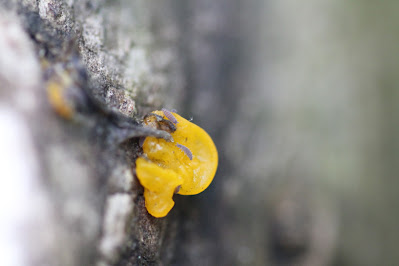 These mushrooms may also be found sprouting from the doorways of barns, houses, or even from wooden gates. In ancient Europe, when homeowners found a cluster of these mushrooms sprouting from their door jam, it was believed their home was under the curse of a witch. The only way to break the spell was to stab the yellow jelly-like masses with something sharp releasing the curse. The trouble was as soon as it rained again the mushrooms would hydrate and bloom again and the poor residents must have felt as if they could never rid themselves of the witches curse permanently. Short of replacing the door jams or gates they would have had the curse befalling them after each rainfall. In Sweden it was believed that witches’ butter was the bile spewed forth by the witches themselves; hexing anyone who found it near their home. The only way to rid yourself of the curse was to burn the slimy mass in a fire. These superstitions followed many European immigrants into the New World and over time created a mistrust of eating mushrooms…. any mushrooms, even if properly identified as being safe. In truth many mushrooms are safe, delicious, healthy and have medicinal qualities that can benefit most anyone. However, ALWAYS make sure you know 100% what you are foraging and preparing to eat.

Always err on the side of caution.