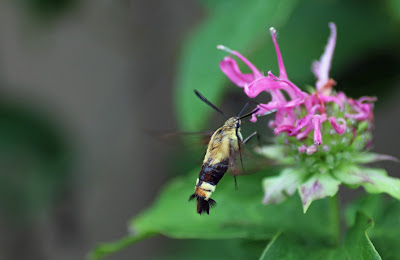 Snowberry Clearwing Moths (Hemaris diffinis) are sometimes referred to as Hummingbird Moths and Lobster Moths, which are both colorful local names for these moths, which to some must superficially resemble the creatures they are nick-named after. 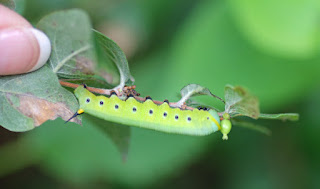 They are common throughout the Eastern United States, east of the Continental Divide and may be found anywhere there are flowers to nectar at and host plants to lay their eggs upon. Caterpillars feed on dogbane, dwarf bush honeysuckle, snowberry and honeysuckle. With the over abundance of invasive honeysuckle in much of Missouri, the feeding habits of these little caterpillars can only be appreciated. 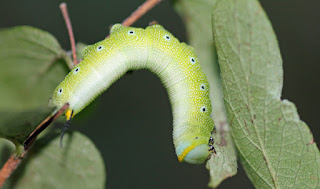 These day flying moths hover at flowers and behave much like tiny hummingbirds as they unfurl their proboscis and sip nectar. They carry pollen with them as they visit flowers, making them somewhat important pollinators. While they prefer to fly around during the day, they will sometimes continue to be active at dusk if food sources are plentiful

These beautiful moths are bumblebee mimics which may afford them some protection from predation as many animals that would feed on moths may not tackle something that can fight back with a painful sting. Although once a predator learns of the dubious trick they will readily dine on them. Caterpillars are also susceptible to predation and use camouflage to blend in with the plants they feed on to help avoid hungry birds and other predators.

There is another moth in this genus also found locally and often mistaken for the snowberry, it is the Hummingbird Clearwing (Hemaris thysbe). The snowberry, pictured here always has black legs. Otherwise they are very similar with yellow and black furry bodies and mostly clear wings border in reddish-brown with black veins. 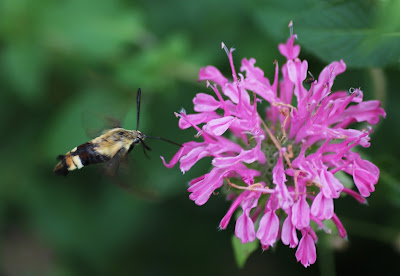 After mating, females will lay eggs on the host plant and once the caterpillar finishes growing it will drop or crawl to the ground and burrow into the soil where it will pupate. There are two generations in Missouri, but in colder climates further north there is only one generation.

As you visit your backyard flower gardens keep an eye out for these buzzing moths as they fly past you looking for flowers to sip nectar.