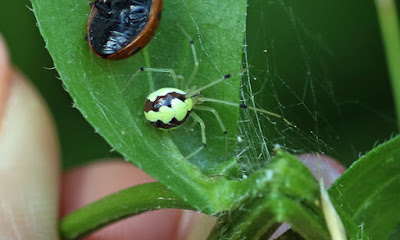 Leafy Cobweb Spider (Theridion frondeum) are beautiful spiders that are rarely seen because of their diminutive size. Females measure between 3-6 mm and males between 3-3.5 mm. Aside from the fact that they are tiny, they also hide out in leaf litter on the forest floor on at the edge of forests in fields, making them even harder to spot. When they do "hang out" in a bush or shrub, it is usually on the underside of a leaf that has been curled up. All of these things combined makes for one difficult spider to find. The one photographed here was found quite by accident. I actually spotted the bright red of the ladybug first and then discovered the spider next to it. Obviously the spider is responsible for the demise of said ladybug. 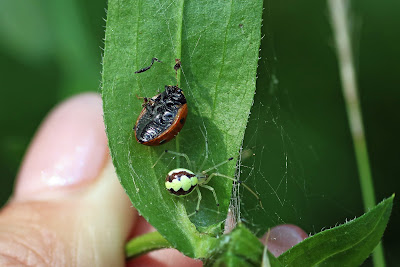 The leafy cobweb spider is highly variable in color and some experts claim you can collect numerous specimens from within a particular area and all will look enough different to make you think you've found entirely different species. Typically however they are creamy white, to greenish yellow with various dark brown-black line or blotches. There are specimens that lack the dark marks and are solid in color. The head is light in color with dark lines. Legs are also light colored with dark spots. I think their legs look like they are wearing little black shoes on the tips.

There are over 600 known species Worldwide within the Theridion genus, making them one of the largest groups of spiders. This particular species is found from Southern Canada, southward to Alabama and west to North Dakota.

Females make an egg sac in late spring that hatches sometime in early August. She will place the egg sac within a curled leaf and guard it. Once the spiderlings hatch she will remain with them for a short period time. This maternal care helps protect her offspring from predation. After several molts the young spiders will spend the winter as sub-adults and emerge in the spring to finish their lifecycle into an adult spider.

These are truly one of the most beautiful little spiders I've ever encountered. If you would like to find one, try sifting through leaf litter on the ground and who knows what surprise creature may turn up. 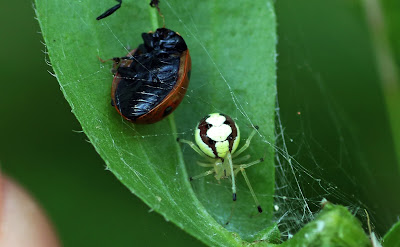