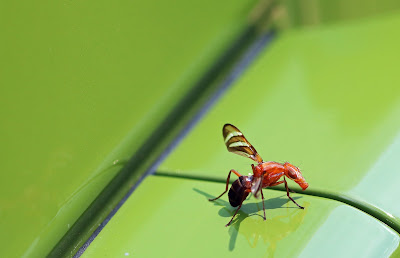 This picture-wing fly (Tritoxa incurva) in the family Ulidiidae are Sometimes referred to as the "Gas Mask Fly" and from the looks of that face it is easy to understand how it earned that nick-name. They are common throughout the Central and Eastern portions of North America.

Very little seems to be known about them and there is even less information available about them. Reportedly the larvae feed on organic matter as all fly larvae in the family Ulidiidae are known to do. They are found in meadows, fields and rural areas where flowers occur. It is not clear what their preferred food is as adults, but most likely flower nectar since they are known to be found where flowers are blooming. 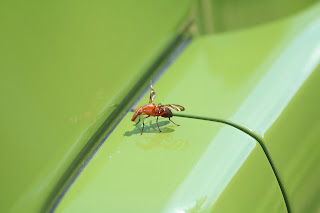 Flies in this family are often mistaken for fruit flies, or in the case of the one pictured here, my husband tried to convince me it was a deer fly. In his defense, we had just returned from the farm north of where we live where he was surrounded by biting deer flies. I am guessing he still had that bad experience on his mind when he spotted this fly on my car after we returned home. I even went along with his ID and felt very sheepish when I asked about it's identity on a Facebook insect group page and was told it was a picture wing fly. I REALLY DID KNOW THAT! It seems I fell under the "It has to be a deer fly" spell.... same as my husband.

These small flies (6-8mm) are rusty-red in color and have strongly patterned black and clear wings. Look for them May through October in areas where flowers are. Also may be found at lights at night, at least they are around here. 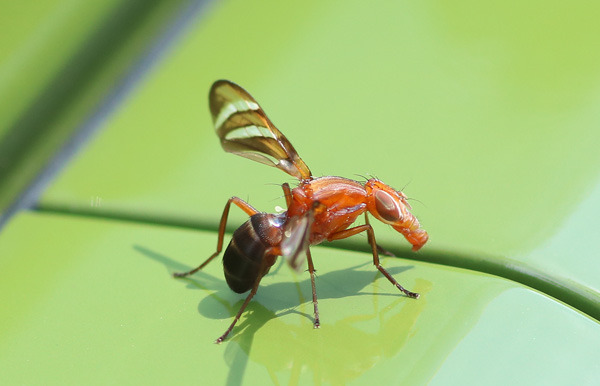