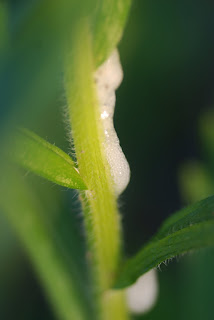 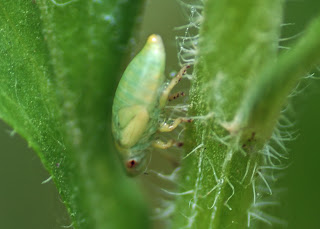 Spittle bugs are a common sight in the spring and summer, and may go unnoticed by many. I've had children ask me during nature hikes "who spit on the grass?" I am always happy to tell them it is an insect, a spittle bug to be exact. Most of the time it takes some convincing, so I will gently sift through the "spit" and show them a tiny insect nymph hiding inside. This fascinates the kids and I must say I find it quite fascinating myself. Without knowing that an insect had created such a clever hideout to grow in; one would never know and would absolutely assume as these children often do that someone had very bad manners and "spit" on the grass. The spittle bugs are from the Cercopidae family of insects in the order Homoptera which means same wing bugs. There 24,000 species of spittle bugs Worldwide, and 54 species are known in North America, but in Missouri there are four that are most commonly seen, two reside in pine or conifer trees and the other two typically are found in meadows or areas with tall grasses. The species Philaenus spumarius is one of the meadow spittle bugs whose juveniles or nymphs are a brown color with spots and known to feed mostly on alfalfa and clover. The species Lepyronia quadrangularis is the second, this species of the meadow spittle bugs. It can be identified by the two oblique bands across its back and its preference for feeding on grass. I believe the mass of spit pictured here is from the first one, spumarius. This species is the most common in the Midwest. These little wads of spit are all over near our garden and along the edges of our fields where the grasses tend to get very high and overgrown. The female lays eggs in late summer or early fall, usually in August or September that overwinter, in the spring. The eggs hatch and the young nymphs climb onto the grasses or conifers, and begin feeding, they will create this frothy mixture of spit from their nether regions. They pump their bodies to create the froth then use their back legs to cover themselves with it. It is believed that this foamy mixture keeps the nymph moist so that is does not dry out, it may also be a form of protection from potential predators, after all who wants to sift through spit to get to your meal? In large numbers these insects can cause significant damage to grass crops like alfalfa and clover. The young nymphs use their piercing sucking mouth parts to puncture plants and extract the juices. The plants will wilt and are often times stunted and this greatly reduces yields. The adults will also feed on these same plants that they grew up on, once the plants begin drying out and dying they will move to fresh plants in another area. The adults are not known to cause significant damage to alfalfa crops. Spittle Bugs feed on over 400 varieties of plants. As a young nymph they are a light green color, when they become adults they turn pale green or yellow, or some species will have bands of color on them. Other species, typically the ones who feed on conifers will be brown as adults. In some areas they are called "Froghoppers" from their ability to hop great distances for their small size and they somewhat resemble frogs. If you don't mind sifting through some sticky wet spit, look and see what is lurking inside.
Posted by Shelly Cox at 8:11 PM