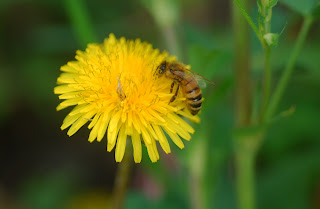 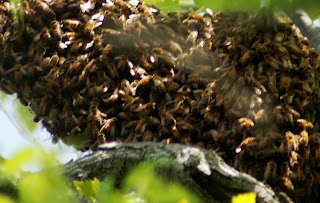 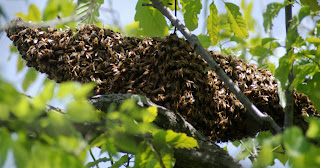 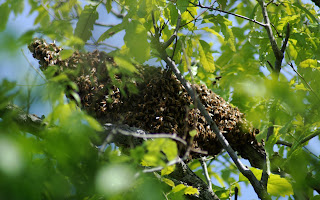 I've posted about Honey Bees before and they continue to be one of my favorite things to write about. They are fascinating in their lifestyles and habits. Yesterday my husband, Joey and I went to a farm in Fillmore, MO that his family owns. This farm is situated near the Nodaway River and is a favorite place for wildlife viewing. On this particular visit, Joey said he heard bees, and they were loud. After listening closely I too could hear them. We carefully made our way to where the sound was coming from, as we got closer they got louder. I was the first to spot the swarm of bees high in a tree top. It was a fairly large swarm, I estimated it at about 20,000 bees or so. The sound was deafening below the tree. It is unbelievable how loud they are, when we first heard them we were easily 100 yards from them, possibly closer to 150 yards. We could see scouts leaving the swarm a few at a time, and then return a few minutes later. I assume these were reporting to the group if a suitable location had been found to set up home.
Swarming is common behavior among bees. When a hive becomes too over-populated part of the hive will disperse and create new hives. This phenomena usually occurs in the spring. There is an old saying that goes:

A swarm of bees in May is worth a load of hay;
A swarm of bees in June is worth a silver spoon;
A swarm of bees in July isn't worth a fly.
There is some truth to this, swarming in May will allow the bees time to stock pile honey reserves to survive the cold winter, in June their chances are still good, but in July it is pushing things. They may not be able to gather enough pollen and nectar to create their valuable life source. Swarms are usually not bothersome, and rarely aggressive. It is just a bit intimidating to witness. So many bees in a large concentration can scare a person who does not understand what is going on, or if you are allergic to bee stings it can be frightful thinking about all those bees descending on you at once. This will not happen, these bees are more intent on finding a suitable spot for a new hive, than they are in defending anything. Even though their queen is with them, they do not normally cause any problems to humans that may be nearby. When a swarms first sets out they generally will fly to the top of a tree or other vantage point. The cohesiveness of the swarm is from the pheromone the queen emits that the other bees are attracted to. Once a scout locates a good spot for the hive to set up home, he will transmit this information to the swarm by excitedly dancing on the perimeters of the cluster of bees. The scout who has the most excited story to tell is the one the swarm will follow to their new home. This will usually be inside a hollow tree, or possibly a nearby abandoned building such as a home, shed or barn. If for some reason the queen rejects the new site, the swarm will follow her to wherever she lands and the search will continue until the queen approves of the site. The phenomena of swarming bees is becoming a rarer sight over the years. The presence of a two different mites have greatly reduced the populations of wild bees, and fewer people are keeping bees than in previous years. So to actually witness something like this is a privilege indeed.