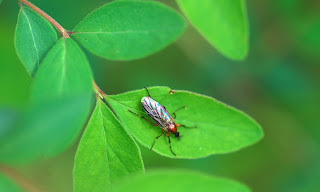 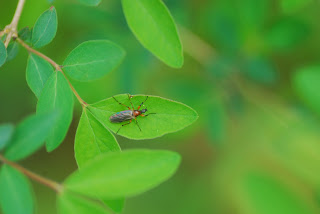 While out mushroom hunting the other day I came across this fly on a leaf. At first she was sharing her leaf with a male, and it appeared they were mating. As I approached the male departed but the female stayed behind. I believe this to be a female March Fly. They are throughout the United States and can be found in various habitats. Often found in grassy areas, timbered areas (such as this one), meadows, yards, etc. They are small flies and typically will be black, although some females of certain species will have a reddish thorax (like my female pictured). March flies are some of the oldest flies in the world with fossil records dating back to the Jurassic Period. They are considered to be pollinators of some plants, but in large numbers they can also be harmful to turf and grasses. The adults of many species in this family of flies do not eat, instead they exist solely on the food they consumed while in the larval stage. Like the title of this blog says, some refer to them as "Lovebugs".
Posted by Shelly Cox at 1:37 PM