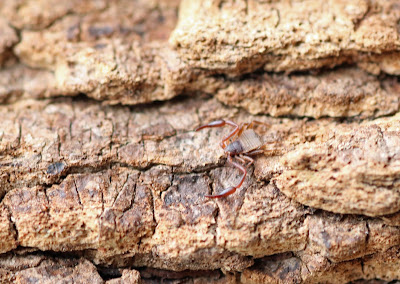 Peusdoscorpions, are a type of arachnid that superficially resemble true scorpions. They lack the stinger and are much, much smaller at only 0.08-0.31 inches in length. Although there is a species, Garypus titanius that may reach lengths up to 1/2 inch. Large by pseudoscorpion standards to be sure.
Body is flattened and pear-shaped and many people mistake them for ticks when they first spot them. In fact the one photographed here was discovered by my daughter when she was unwrapping a wedding gift. I heard her make a comment "oh look, we got a tick with this gift." I looked and discovered it was not a tick, but a pseudoscorpion.

The abdomen of pseudoscorpions have twelve segments and is made up of a protective substance called chitin. They are born looking very much like the adult and go through 3 instars, or molts, before reaching adult size. They may have 2, 4 or no eyes at all. Even those with eyes do not see well and do not rely on eyesight to find prey. Instead they use very sensitive hairs on their legs and pinchers. When a prey item brushes against them they are able to move quickly and grab dinner! Venom glands are located in the pincher-like claws that they use to inject venom into their prey. They are completely harmless unless you are booklice, mites, small flies, ants, or the larvae of carpet beetles and clothes moths. The venom works to dissolve the tissue of their insect prey so this little predator can slurp the insides out like a tiny insect slurpee.

Because of their tiny size they are rarely seen by humans, but they may occasionally show up in homes where you are likely to find them in bathrooms, kitchens and laundry rooms. They seem to prefer moist areas and in the wild you will likely find them in woodlands hiding up leaf litter or wood piles. Being tiny and lacking wings can make it difficult to move from one location to another and to spread your genes around. They have conquered this potential problematic dilemma by hitchhiking on various beetles, and thus are carried from one location to another via the beetle buses they grab a seat on. All of the best travel options serve dinner and these beetles are no exception. Often covered in mites that can drain the beetle, the pseudoscorpion finds itself attached to a flying all-you-can-eat-buffet. This symbiotic relationship benefits both the beetle and the tiny hitchhiker. The beetle gets rid of the mites and the pseudoscorpion gets dinner and transportation. (Ivory Marked Beetle pictured has a pseudoscorpion attached to it).

Some species of pseudoscorpions will even mate on these flights, giving a whole new perspective on the "mile high club."
Males form a packet of sperm called a spermatophore that he deposits on the ground (or the back of a beetle), and then grabs the female with his pinchers and drags her across it so that she will take his sperm up inside her body. Other species push the sperm inside their mates. Females may mate with numerous partners and can retain the sperm of each. She will become impregnated when she is ready to reproduce. She can produce up to 40 offspring and will provide maternal care for them by carrying them on her back and washing them with her pinchers. 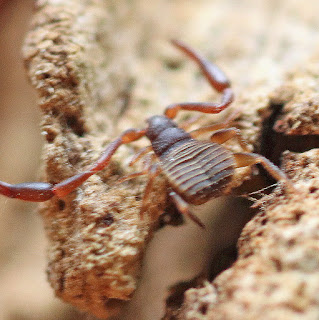 The first known fossils of pseudoscorpions date to 380 million years ago. Their body shape has changed very little since they first appeared. Aristotle was the first person known to have described them and  most likely encountered them in the vast amount of papers and books at his disposal They are sometimes referred to as Book Scorpions because they are often found in books and piles of paper where they are feeding on booklice.

They are completely harmless to humans and cannot sting or bite us. Their habit of feeding on insects and tiny arachnids, like mites, that can cause significant damage makes them hugely beneficial to us. You will most likely never find more than one or two every once in awhile, but should you be encountering them in large numbers you may have a moisture problem or a large population of prey items they like to feed on. those issues should be addressed, rather than outwardly killing these tiny arachnids by using chemicals. 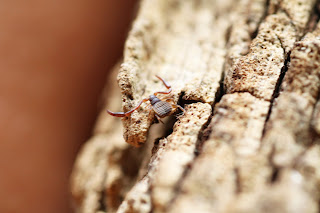