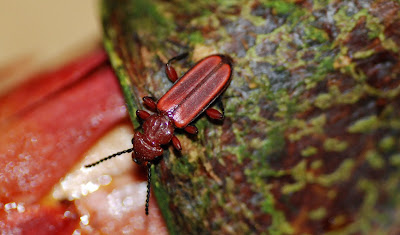 This beautiful rusty-red colored beetle is a Red Flat Bark Beetle (Cucujus clavipes). I was shocked to find it crawling in my bathroom sink. I had never seen a beetle like it before. I captured it and took a few pictures and later identified what it was. This only perplexed me even more, why would a bark beetle be in my bathroom sink? Then it dawned on me....my husband cuts and burns wood for our home. This little hitchhiker must have came in on some wood and made it's way to the bathroom. It was a small beetle, barely 3/8 of an inch in length. Every square inch of him was reddish in color, top, bottom, back to front. The only exception to this was his antennae and tibae and tarsi which were black. Very striking beetle. After doing some research, I discovered that this beetle is quite a hardy species, they live throughout North America, even as far north as Alaska, where it is capable of surviving temperatures at -70F. Apparently there have even been studies done with this species that showed it was capable of surviving such extreme super temperatures as -238F. When you consider that most insects that overwinter can only tolerate temperatures in the -13F range, it seems almost impossible that these beetles are able to withstand that kind of frigid cold.  What kind of a creature can even come close to surviving such extremes? Seems they have their own built-in antifreeze-like cocktail that aids them in this logic-defying feat. Very little is reported on their diet, but it is believed to consist of other insects, including beetle larvae, mites, and other small arthropods. 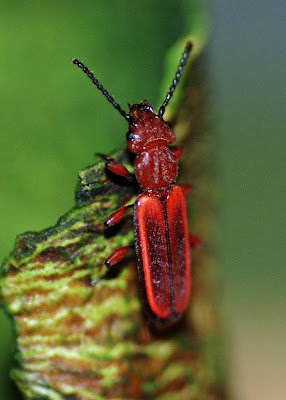 Their extremely flattened body gives them the ability to travel under loose bark with little effort, they can even maneuver through tunnels in the wood left by other wood boring beetles. They will travel these tunnels to prey upon the unsuspecting larvae residing there. These beetles are considered beneficial to humans because of their ability to eat harmful wood boring beetles that can damage timber. I couldn't find much about their mating cycle, but I would presume after mating, the female would deposit her eggs under the bark of a tree, the eggs hatch and the larvae begin seeking beetle larvae to dine on. Adult beetles will overwinter under the bark of trees.
I am constantly amazed at the diversity of insect life. I am often surprised and never bored when it comes to the many miniature creatures roaming around on six legs.
Posted by Shelly Cox at 7:06 PM