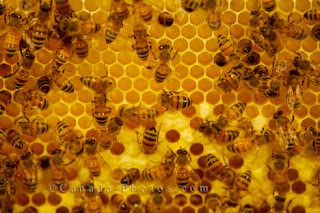 LONDON (March 28) -- It's the ultimate honey trap. A British company has successfully trained bees to sniff out explosives, drugs and other hazardous materials, and their winged warriors could soon be on duty at airports, train stations and other potential terrorism or trafficking sites.

Honeybees have incredibly sensitive olfactory organs, which they use to help track down their favorite food -- sugary nectar -- in the wild. Realizing that the bugs can be taught to smell much more than just sweet stuff, U.K. firm Inscentinel developed a gadget that harnesses this powerful sense to identify would-be bombers or drug smugglers. And while it takes about six months and $37,000 to train a single sniffer dog (which has a similarly strong sense of smell as the average bee), swarms of honey harvesters can be skilled up in just a few minutes


A British company has figured out how to train bees to detect explosives or drugs by exploiting their desire for nectar.
Inscentinel's bees are taught to identify suspicious substances using Pavlovian conditioning. (Russian scientist Ivan Pavlov famously taught his dogs to drool whenever they heard a bell, as they thought they were about to be fed). Up to 500 insects are placed in a special "bee hotel" and exposed to a certain odor -- such as a key ingredient of TNT -- and simultaneously rewarded with a sugary liquid. The process is repeated up to five times, says Mathilde Briens, head of R&D at Inscentinel, by which point, "the bees associate the smell with food. So next time they sniff this particular smell, they will stick their tongues out because they expect food."

Once their odorous education is over, the bees are ready for work. Thirty-six bugs are transferred from the bee hotel into a hand-held device that resembles a portable vacuum cleaner and gently strapped down with plastic ties. That loading process is entirely automated, so non-bee experts can operate the machine without getting stung.

Once they're seated in the machine -- called a VASOR (for Volatile Analysis by Specific Olfactory Recognition) -- a fan sucks air past the immobilized bugs' antennae. If they detect a trace of Semtex, for example, the bees will extend their tongues in hunger, breaking beams of light that run in front of their heads and sending a signal to the VASOR operator. That automatic warning system means that anyone can use the gadget after a few hours of basic training. In contrast, learning how to handle a sniffer dog can take many months. And as the gadget contains 36 bees, all individually testing the atmosphere, the VASOR offers greater accuracy than a single explosives hound's nose. "It's almost like having a pack of well-behaved sniffer dogs," Briens says.

The bees' conditioning wears off after two weeks unless they're given repeated sweet treats. So after two days hunting bad guys, the bees are safely reintroduced to their hive.

The gadget may sound a little un-bee-lievable, but government-funded tests have repeatedly shown that Inscentinel's bugs are highly effective bomb sniffers. A 2004 study funded by the U.S. military found that trained honeybees could detect lower concentrations of TNT than commercial ion scanners. And a review last summer by Britain's Home Office noted that the bees achieved better results than a popular hand-held vapor detector. Briens says that the VASOR, which is at an advanced prototype stage, could be in service by next year.

So watch out terrorists and narco-traffickers: You could be soon be caught out by a real sting operation.
Joey Cox