Tiger among the flowers 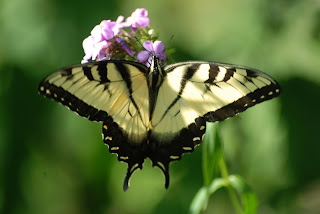 This gorgeous butterfly is the Eastern Tiger Swallowtail (Papilio glaucus). Relatively large at up to 6 inches, they are a common sight throughout the eastern portion of the United States as well as into portions of Canada. This butterfly cannot be mistaken for any other species in the east, with their bright yellow wings and black wing stripes they are uniquely marked. There is a western species that is very similar and will be found in the western portion of the United States. A color morph has developed that is mostly black. Presumably this is a mimic to the pipevine swallowtail which is poisonous to potential predators. This would afford the tiger swallowtail some protection from hungry predators. Look for them in gardens, at forest edges, along roadsides, and in meadows. Where the adults will be found nectaring at various flowers, especially lilac, sweet william, wild cherry etc. The larval host plant varies to include: Ash, lilac, tulip tree, willow, cottonwood and basswood. The young caterpillars resemble bird droppings. The one pictured was nectaring at Sweet William. I've seen several of these already this year. Most of them have been near our timber.
Posted by Shelly Cox at 3:07 PM