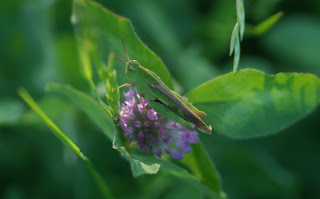 I believe this little grasshopper is the female "Northern Green Striped Grasshopper" Joey and I made a trip out to Happy Holler to look at the river which was flooded from recent heavy rains. We decided to take pizza with us and have a little picnic. After we were finished eating I explored the grasses and bushes nearby and found this little grasshopper trying pitifully to hop away. Some of her legs were missing and she seemed to be having some difficulty in navigating where she wanted to go. She tended to stay close to the ground under the grasses making it very difficult to capture a picture. I finally placed her on top of this clover bloom and managed to take a few photos before she once again disappeared in the grasses below. This species is quite common in our area. Males are marked very differently from the females. Males will be all brown, and blend in well with dirt and dried grasses. You will find them in moist habitats such as near rivers, where this one was. Also found in prairies, grasslands and grassy slopes. These are not considered a significant pest to agricultural crops as their numbers in any given area are usually not too high. They prefer to eat succulents but will also feed on a variety of low growing grasses. Mating occurs in late summer, with females depositing eggs that hatch late in the season, these young nymphs will overwinter. In the spring the nymphs become active again and begin feeding and finish their growth cycle. Typically these are the first grasshoppers seen in the spring.
Posted by Shelly Cox at 9:34 AM