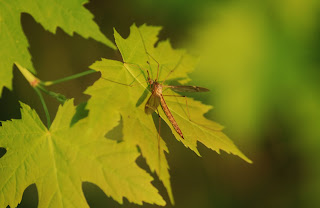 I can recall as a child when these large insects would show up in spring, my brothers and I were convinced they were the largest mosquitoes anyone ever had seen. Even their locally common name of "Mosquito Hawk" implied a mosquito to not be messed with, can you imagine the welt caused from that bite? To this day I know of people who believe them to be mosquitoes. So that gives me some comfort in letting me know I wasn't the only one who thought that. Now I know better, and realize these flying giants are nothing more than a harmless fly, "crane fly" to be exact. Although I do prefer another common name that these flies are known to be called and that is "GollyWhopper" how fun is that name? Crane flies are a common sight this time of year and throughout the early summer. There are so many different species I can't begin to tell one from another with any accuracy, and with over 14,000 species occurring Worldwide it's no wonder. They appear to be gangly, or all legs when one first sees them, their bodies are often impossibly thin and they often rest with their wings outstretched. Some tropical species are known to reach 5 inches across, now that is a big 'GollyWhopper". Most of them in Missouri are around 1 inch but I know I've seen some around here that are pushing the 2 inch mark. They are weak and poor fliers, when disturbed they rarely fly more than a few feet from where they orginally were. They are very delicate, and when captured it is common for a leg to fall off, sometimes even with the most careful of handling this can occur. They are completely harmless to humans. Many of their common names such as the one mentioned above of Mosquito Hawk as well as other names like Skeeter Eater, and Mosquito Eater hint that they may feast on summers most annoying pest, I'm sad to say it isn't so. They do not feed on mosquitoes. Good news is they won't feast on us either. The female crane fly carries eggs in her abdomen which will give her a swollen appearance, she also has an ovipositor that extends from the back of her abdomen which is often mistaken for a stinger. The sole purpose of this appendage is to deposit her eggs in a suitable sight for hatching, she doesn't have the ability to sting you with it. Some crane flies in the larval stage will feed on mosquito larva, and adults feed exclusively on nectar if they feed at all, which many species do not. Most crane fly larva feed on plant roots and can cause some damage to turf and grasses. The young larva have a set of their own interesting nick-names which include "leatherjackets", "leatherbacks", "leatherback bugs" or "leatherjacket slugs", supposedly this comes from the way that they move. Less than 2% of crane fly species have been studied so little is know about the life cycles of many species. Some are aquatic in the larval stage most others are not. These awkward looking, longlegged creatures are fascinating in their own right. We have thousands of them near our timber each evening, fluttering around in the vegetatation clinging to the leaves of plants with those longggg legs. I can see subtle differences between certain individuals which tells me there are many species present, but it is beyond my expertise to give them a name,beyond calling them crane fly. The birds feast on these insects in large numbers, so they become part of the food chain and are a staple for many insect eating birds. Take a walk near some timber I can almost guarantee you will see these guys. Can't go for a walk? Turn on the porch light, they are attracted to light and will be found there as well. Happy hunting, but leave the mosquito repellent at home.
Posted by Shelly Cox at 11:30 AM