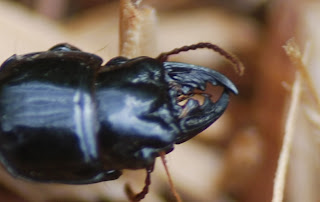 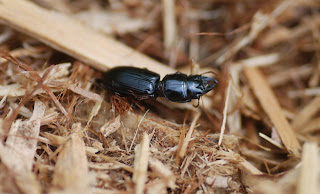 This scary looking little ground beetle was crawling in the mulch in one of my flower beds. I believe it to be the Big-Headed Ground Beetle (Scarites subterraneus), although it has not been positively identified. I think it should be called "Scary-Pincher Ground Beetle" Just look at those mandibles! This beetle was approximately one inch long, and completely shiny black. The elytra were grooved and it had this impossibly thin "Waist."It is this waist that gives this beetles its other common name of Punduculate Ground Beetle. A peduncle is a narrow area connecting two wider areas, in the case of this beetle it refers to the tiny waist connecting the eyltra to the pronotum. These are crazy-looking beetles. They are a fairly common beetle and are nocturnal. They will be found at lights at night where they prey on other insects. With those jaws I am guessing very little gets away from them. It is even reported that they will feed on the remains of their own kind in a form of cannibalism. Look for them in yards, gardens, open fields and farms, where they will be hiding under stones, or in leaf litter. They occur in almost all regions of the United States with exception to the Pacific Northwest. A unique habit of these beetles is to stiffen its body and play dead when being disturbed, which is exactly what this particular beetle did, although I refused to pick it up. I wasn't brave enough to find out if it bites or not. I've been bit, pinched, stung and had formic acid sprayed on me, all unintentionally. I wasn't about to tempt the fates and purposely do something to get me bit!
Posted by Shelly Cox at 10:36 AM