Loss of Oak Trees in Missouri linked to "Long-Horned" Beetle 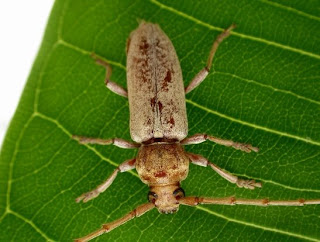 I came across this article while browsing and found it interesting. I thought I would share it. It still amazes me how something so small in large numbers can cause so much damage. This photo belongs to Don Cadle and was taken from bugguide.net

FAYETTEVILLE, Ark. - Today the trees of the Ozark Mountains look lush and green, but over the next few months brown, bare patches will develop among the trees-an indication of a small insect that may be responsible for killing an estimated $1 billion worth of timber in Arkansas and Missouri. This insect may also cause long-term change the vegetative landscape of the Ozarks. University of Arkansas researchers are collaborating with the U.S. Forest Service and other agencies to study the life cycle, distribution and abundance of the red oak borer, a middle-sized nocturnal brown "long-horned" beetle native to the Ozarks. The beetle lived in relative obscurity until 1999, when USFS officials noticed a large number of dying oaks near Clarksville. They took a close look and found a possible culprit-an increased number of red oak borers. "In a very short period of time, for unknown reasons, the red oak borer population has reached a remarkably high density," said Fred Stephen, University Professor of entomology. The red oak borers have a two-year life cycle, spent mostly as larvae that bore into the heartwood of the host oaks. The larvae carve out galleries in the wood-chewing through layers of rings in the middle of the tree and creating small holes. Most of the time, the oaks mount a defense that successfully combats the larvae. But the dramatic increase in larval density-from an average three or four to a tree to 30 or 40 in a tree-has led to the deaths of tens of thousands of trees. "It turns the trees into Swiss cheese," Stephen said. Because of the insect's two-year life cycle, Stephen and his colleagues anticipate that the visible evidence of damage done to oaks will be worse this year than last year. Aerial photographs will show large swaths of brown snaking through the green of healthy trees. In the past, the beetles have preyed on less healthy specimens: Trees that are old or stressed from lack of water, trees with root disease or trees living in poor soil. In these cases, the borers usually delivered the final "coup de grace" that killed the tree. Most scientists believe that the advanced age and density of the oaks, the drought stress of the last several years, combined with diseases and secondary insects, have created an "oak decline" event that has weakened trees to the point that red oak borer can easily kill them. In a cut oak forest, sprouts from cut oaks will grow into new trees, but the stumps of borer-killed trees will not produce sprouts. If the red oak borers continue to decimate the Ozarks oak population, they could completely change the make-up of the Ozarks landscape, creating a forest dominated by shade-tolerant understory trees, such as maple and ash trees. This may affect not only the plants and animals that currently live in the Ozarks, but also neotropical migratory birds that use the Ozarks as a stopping point along their flight path. Stephen and researchers at the University's Center for Advanced Spatial Technologies (CAST) plan to map the infested areas this summer using Global Positioning Systems (GPS) and satellite imagery. Using information from CAST, the researchers can gather information about the amount of chlorophyll in a given area, the slope, aspect, vegetation type, soil type and location of ridges and valleys relative to the infestation of a given area. The USFS will send crews to measure forest density, individual tree diameter and vegetative composition in certain areas to corroborate satellite data. They also will use data from previous years to track the borer's spread and to create maps that show high-risk areas so land owners can make informed decisions about their oak trees.