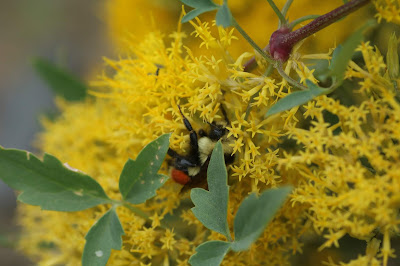 On a recent trip to Colorado we experienced gorgeous scenery, beautiful temperatures and very little bug life. We rented a cabin in the higher elevations which meant cooler temperatures and very little 6-legged critters scurrying about. We made several trips down the mountain to the lower elevations and spent time near a river called Clear Creek, where we enjoyed relaxing near the rushing water, and in the case of my husband fly-fishing. On one such trip to the river, while my husband fished, I found numerous insects to watch and photograph. One such insect was the Hunt's Bumblebee (Bombus huntsii). I've often seen pictures on the Internet of the yellow, black and orange furred bumblebees and it became a goal of mine to one day see one.....and viola there it was right in front of me sleeping inside a cluster of blooms. I coaxed it out gently so as not to be stung and it nonchalantly climbed onto my hand and hung out with me for quite awhile, seemingly uncaring a huge beast now held her in their hand. Such a trusting little fuzz-butt. The Hunts Bumblebee can be found in many different habitats, including prairies, scrubby desert areas, meadows, along roadsides, and streams and even as far up as Mountains and Volcanoes. Although these high altitude (above 3,000 feet) lovers are the more adventurous and tolerant of the species. This would not be a common place to find them. Alongside the river and foraging on the Nodding Groundsel Flowers seemed to be the preferred place for this particular bee and several of her friends, or hive sisters. 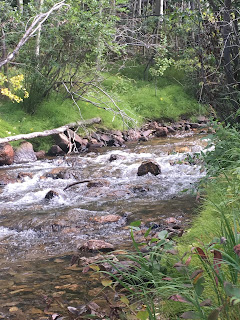 With over 3,000 bee species in the United States alone there is no shortage of bees, bumblebees in the genus Bombus make up 40 different species. They are probably the most recognized and under-appreciated of the bees. They are typically larger than other species of bees and covered with an excessive amount of fur that keeps them insulated from cooler temperatures allowing them to be active when most bees are waiting for it to warm up. There is much debate, among scientists, who debate these sorts of things, that bumblebees are much better at pollinating wildflowers than any other species of bees, including our industrious honey bee.

This species occurs throughout Western North American, including Canada and parts of Mexico. They are most active during the summer and early fall and are considered common in their range. Although there is some indication their numbers are declining, which may be attributed to habitat loss and less flowers to gather pollen and nectar. They are not large by bumblebee standards, where the Eastern Common Bumblebee may reach lengths over an inch, this species is more average in size at a modest 1/2 inch with queens slightly larger at approximately 3/4 of an inch. 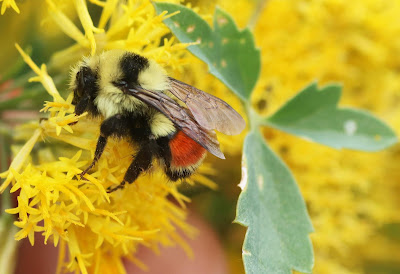 Like almost all bumblebees, they nest underground or hidden away from predators. A bred queen wakes up from hibernation with one thing on her mind, find a home and lay eggs! She will locate an abandoned rodent burrow, wood pile, hay pile or area near the foundation of a building where she will set up house. First job is to create a small honey pot that she will fill with pollen to feed her future brood. Once she has collected plenty of provisions she will lay eggs directly on the mound of pollen and place her body over the eggs to incubate and protect them. She will only leave the nest, at this point, to gather more provisions, if needed.

In about four weeks the newborn bees begin appearing and their job will be to clean the hive, gather pollen and nectar and take care of the larvae. The queens only job at this point is to lay eggs and grow the hive. While a hive may reach hundreds of individuals, it is more common to have approximately 100-200 members. In the late summer adults will emerge that are males, and virgin females. These future queens will take their maiden flight seeking males. Once mated, the males die and the new queens forage for food until it is time to dig a small chamber that acts as a hibernacula which protects her from the harsh winter weather. In the spring the cycle starts all over again. 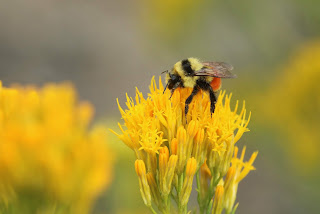 The colors on the Hunts Bumblebee are stunningly gorgeous and I am so happy to mark this one off my lifer list of insects. This was such a sweet encounter with the ever humble, bumblebee.
Posted by Shelly Cox at 3:06 PM