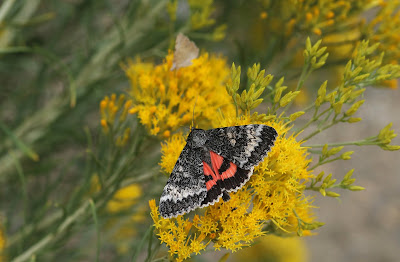 Grote's Underwing Moths (Catocala grotiana) belong to the moth family Erebidae. Native to Arizona, Utah, Colorado and other parts out west. Although they are rarely encountered in the Northwest. There are over 250 known species of Underwing moths in this genus and approximately half live in North America, with the lions share being in the United States. The other half are found throughout Europe.
Members of this genus use cryptic coloring to blend into their environment in a perfect bark-like camouflage that makes them virtually impossible to see. If a predator happens upon one, it will flash its brightly colored underwings at the offender, temporarily startling it. Ideally this will allow the moth time to fly away, avoiding being some hungry predators snack.

The one pictured here was found nectaring at the Nodding Groundsel Flowers and photographed around 4:00 in the afternoon. When I posted this picture to Facebook a friend of mine, Eric Eaton  over at Bug Eric commented "What's wrong with this picture?" I was perplexed for a bit as to why he asked that. Then he pointed out this is a nocturnal moth, out during the day, nectaring at flowers. Unusual behavior for a nocturnal moth to be sure, but I would guess this is a night flying moths version of a "midnight snack."

These are a medium-sized moth with a wingspan up to 3 inches. The wings are black or charcoal gray with distinct white or pale gray stripes. These markings are key in identification of this species as many underwings look very similar to each other. The underwings are dark red or orange with black lines. They are typically seen in August, and September, but may be around as late as October, weather depending.

Grote's Underwings were named to honor a well known, passionate lepidopterists named Augustus Radcliffe Grote. Grote was born in England in 1841 and spent most of his adult life in the America's where he studied, discovered, curated, collected and wrote about Moths and Butterflies. In 1884 he left the United States after selling his extensive and highly valuable collection to the British Museum. He died in Germany in 1903 at the age of 64.


Females will release a pheromone into the air that attracts males from as much as mile away. After mating, the female will seek out Willow, Poplar, Aspen and Cottonwood trees. They are often found near Aspen groves. Females will lay eggs on the bark of the host trees. The eggs will overwinter protected from the cold behind the bark of the tree. In the spring they hatch and make their way to the leaves to munch away until they are ready to pupate. At this time they will make their way to the ground and form a pupal cell under the soil. A few weeks later the adult will emerge. There is most likely only one generation per year.

Sometimes we find the unexpected in the most expected places!