The Straight-Lanced Meadow Katydid (Conocephalus strictus) is a commonly encountered katydid of grasslands, fence rows and other dry grassy areas. They are found east of the Rocky Mountains with exception of Florida, North Dakota and the northeastern states. There are two basic types of meadow katydids the Conocephalus which are the smaller meadow katydids and the Orchelimum which are the larger meadow katydids (like the black-legged meadow katydid). Of the smaller meadow katydids the straight-lanced species is more heavily bodied in appearance. The female has a long, straight ovipositor that easily exceeds the length of her body. It is this oversized appendage that earned them their common name. Even the males seems excessively endowed and feature larger than average cerci.
This species comes in two forms, a short-winged form with wings that extend 1/3 to 2/3 the length of the body. They will measure about 3/4 of inch in length. The long-winged form have wings that extend past the abdomen, and their overall length will be a little more than a inch.


Males attract females with song and call out incessantly once they reach adult size. When a suitable female has been serenaded and is receptive to his attention mating will take place. Females will use their long ovipositor to scissor into plant stems in which to deposit their eggs. A single female is capable of laying 1,000's of eggs that will overwinter and hatch the following spring. Nymphs are born looking very much like their adult counterparts. They lack wings and reproductive organs. After several molts they will reach adult size sometime in mid-summer. Mating will take place shortly after that and the cycle will begin again.

The sounds I associate with summer are the call of the katydids and cicadas. Each song is as unique as the species creating it. It is possible to identify individual species by sound alone. Challenge yourself to learn the songs and see how many species you can identify, of course it might be 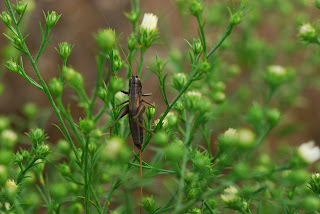 challenge enough to just locate the noise maker among the vegetation. Many katydids are camouflage experts and nearly impossible to see among the plants. This particular species is not prone to hopping away when disturbed, instead they tend to flatten themselves out, stretching their legs behind them, holding their body as close to the substrate or plant surface as they can, in the hopes that you will not see them. It seems to be a pretty good strategy as it took me awhile to spot the individuals photographed here.

Like most insects these katydids are not without predators. Birds, frogs, mammals, and other invertebrates all savor these tasty morsels. The great-golden digger wasp is a solitary wasp that seems to favor katydids as a food source for their offspring.
A female wasp will locate a katydid, sting it to paralyze it, then she will drag it to a ready-made burrow. She will pull the paralyzed katydid into the burrow and deposit one or more eggs on the unlucky victim. The egg(s) hatch and the wasp grub will begin feeding on this fresh supply of food. The feeding activities of the grub will not kill the katydid quickly. The grub seems to know not to eat any vital organs until right before it is ready to pupate. It seems a gruesome fate for the katydid, but the wasp has to eat too, right?

Generally this species is green , but darker specimens are also found, like pictured here. The eyes are typically pale, almost white, but may also have pale peach or reddish eyes. So variability is common is this species. 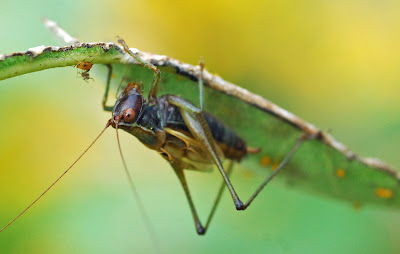