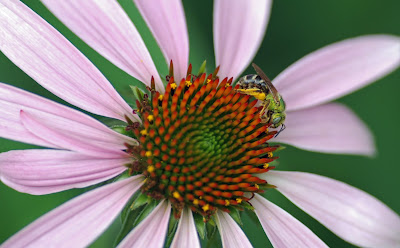 This beautiful bee is one of the metallic sweatbees within the genus Agapostemon, known as A. spendens. There are 45 species within this genus and all occur within the western hemisphere, of those 45 species, 14 are found within Canada and the United States. Metallic sweatbees are commonly encountered during the hot summer months. They can be found on a wide variety of flowers, but seem to favor sunflowers or sunflower-like flowers. Like most bees they have specialized hairs on their legs that allow them to "pick up" pollen as they forage on blooming flowers. Bees within this genus specialize on pollen, in fact Agapostemon translates to "Stamen Loving". The stamen refers to the portion of the plant that produces pollen.

Many species of sweat bees are attracted to humans and will seek us out to lap up the sweat on our bodies. They glean salt and moisture from the by-product we produce when overexerted. Often these bees will sting with no provocation, and for such a tiny bee they can give a wallop of a sting too. Metallic sweatbees however have  little to no preference for lapping at our sweat covered bodies. Although I have been on the receiving end of a few stings by this species when one lands on me for a salty drink and I am unaware that it is there and I inadvertently bend my knee or elbow and POW I am stung for accidentally squishing the poor bee in the crevice of those joints. Why do they always seem to favor those sensitive areas? Usually though they seem to prefer to hang out in our gardens busily visiting flowers. This habit of flying from flower-to-flower provides valuable pollination of many plants. Many people associate pollination with honey bees, and while honey bees are the poster bee for pollination, there are still numerous native bees that provide this service as well, and often times they are as proficient or at least nearly so, as the famous honey bee. 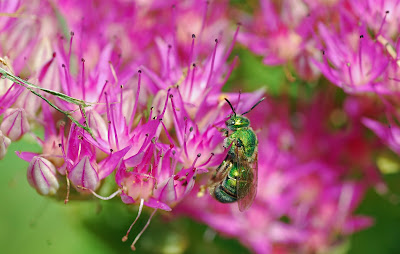 Metallic sweatbees are almost always solitary ground nesters and will dig a tunnel that may have a mound of loose soil or sand at the entrance. Burrows will be created off the main tunnel in which the female provisions with a combination of nectar and pollen in a little pollen-ball. They will lay an egg on this ball of sweetness and then seal up the entrance to the burrow. When the egg hatches it will have enough food to complete it's lifecycle. Some species of metallic sweatbees will nest in a communal nest of sorts......they share the same entrance, but each female (up to 20) will create their own separate burrows to lay their eggs. A. spendens is known to be completely solitary and places single burrows scattered across vast areas, which makes them hard to find.

This species is approximately 3/8-1/2 inch in length making them a medium sized bee and quite large for a sweatbee, which are typically tiny at approximately 1/4 inch or smaller. Males will usually have a striped abdomen and females generally have a solid metallic abdomen like the rest of their body. Some species may be metallic blue, gold or even black, but green seems to be the most common color seen. 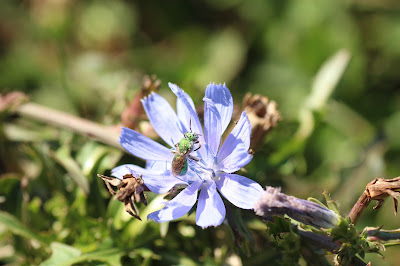