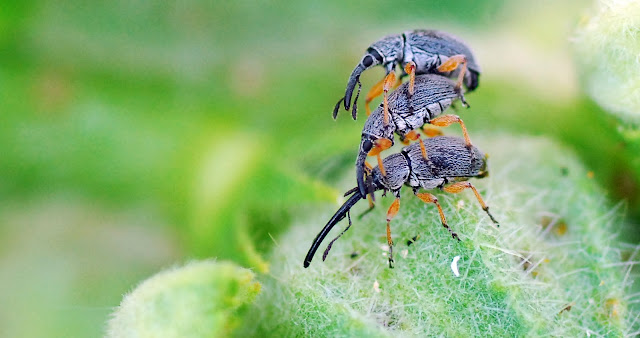 Hollyhock Weevils (Apion longirostre) seem to exist with one purpose in mind...reproduce. I have numerous hollyhock plants in the gardens and each year these super tiny weevils show up in large numbers and I rarely see them when they aren't in coitus. The only thing they might prefer more than this extra-curricural activity is eating. My poor hollyhock leaves are peppered with little holes that these weevils have so lovingly left behind.

At barely 1/4 of an inch, they sure pack a big punch. What they lack in size they make up for in sheer appetite. The female (pictured here on the bottom of this totem pole) has a snout that any elephant would envy. It is easily half as long or longer than it's overall body length. If this picture is anything to go by...it would seem size really does matter. They will feed on the seeds, leaves and buds of the hollyhock. Why the long schnoz on the female? She uses it to chew her way into ovary of the buds of the hollyhock in order to lay her eggs. So this added length helps her reach this particular part of the plant. After the eggs hatch, the larvae eat the developing seed embryo, and pupate within the seed.

This weevil is native to Southern Europe and Asia Minor. It was first found in Georgia in 1914 and has since spread it's range exponentially. They are even expanding their range in their home countries and have been found in France in recent years.

Adults will overwinter in leaf litter and become active again when the hollyhocks begin making their appearance. Males often watch over females as they oviposit, which may be the case in this picture. I'm sure having two males riding piggy back would make things a bit more cumbersome for egg laying. Who says females aren't strong?
Posted by Shelly Cox at 2:42 PM