June Bugs or May Bugs are one of the most common sights of spring. As early as April in Missouri they will begin showing up at porch lights, pole lights and other light sources. Often annoying us as we try to get past their bombardment to enter our house. Many time they enter right along with us; bouncing off the ceiling, the walls and any other surface looking very much like drunken maniacs that can't find their footing.
They seem to have no destination in mind as they crash into lamps, tables, doors, even ceiling fans (this makes for some interesting entertainment).

Many times I've had their sticky legs get caught up in my hair. Fortunately I'm not scared of these little beasts and merely pull the errant beetle from my hair. Many times though I've seen people scream in fright as they are being "attacked" by Junebugs. Trying to convince someone that it is nothing personal on the beetles part, is near to impossible as they are frantically running around and trying to no avail to remove the little demon from their hair. My husband tells me the story of his uncle Benny who when he was a young boy found himself with one of these beetles inside his ear. Now I must admit I would draw the line when they start entering body cavities! So now my husband is afraid that one will enter his ear....I've suggested ear muffs...lol 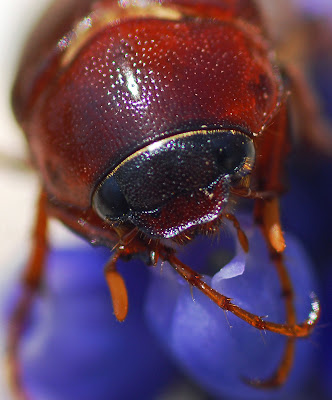 Junebugs are in the family of beetles called Scarabaeidae, which are the thick bodied scarab beetles. They have very sticky legs that they use to hold on to most any surface. Try handling one sometimes and see how abrasive their feet feel. This makes them incredibly hard to dislodge from your hair by the way.

Adult Junebugs  feed on the leaves of plants, but the damage they cause is insignificant it is the larvae of these bugs that cause the problem. Much of the nutrients they need they get as grubs living underground feeding on the roots of various plants, these may include turf grass, vegetable plants, ornamentals, weeds and other transparent roots. Sometimes the feeding habits of these grubs can cause significant damage to turf, leaving brown patches of grass on lawns that are heavily infested with them. Large populations of grubs may also attract moles to your yard, which enjoy feeding on fat, tasty grubs.

Females and males come together in the springtime in large numbers, emerging from their earth bound tunnels. After mating, the female will deposit her eggs up to 5 inches in the ground. In a few weeks the eggs hatch and the newborn grubs feed on roots. In approximately 3 weeks they will be fat enough to pupate and will remain a pupa for another 3 to 4 weeks; then another round of adults are born.

Overall they are harmless to humans, they do not spread disease, sting or bite. They can just be a bit frightful as they bumble around trying to find a likely surface to land upon, and often finding your head instead. Try not to scream, remember it's nothing personal.
Posted by Shelly Cox at 1:20 PM