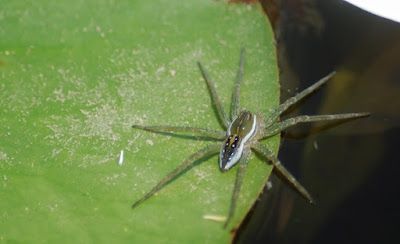 The Six-Spotted Fishing Spiders (Dolomedes triton) are pretty common in Missouri as well as throughout much of their range. They are easy to identify by their greenish-brown bodies and white stripes on their cephalothorax, and along the edge of their abdomen as well as the twelve white spots running in two rows along the top of their abdomen. It is the six black spots on their underside that gives them their common name.
They can get pretty large with a body measurement up to one inch and a legspan twice that large.

They will be found along the shoreline of shallow calm waters, like ponds, lakes, marshes and slow-moving streams. They will walk on the aquatic plants hunting for insects to eat. These spiders are unique in being one of the few creatures able to walk on water. They can also dive underneath the water, row across the surface, and glide. They can walk down aquatic plants beneath the surface of the water and can remain under water for up to 30 minutes by trapping an air bubble between their legs that they will use to breath oxygen. They glide by remaining perfectly still on the surface of the water and letting the wind blow them to new locations and hunting grounds. They walk on water with specially adapted hairs on their legs. Rowing is done by using some of their legs as oars to motivate them across the surface of the water.

Fishing spiders can escape predators in a number of ways, by jumping straight in the air, running rapidly across the water or diving below the surface. Even on land they are quite quick and able to run away from danger. They will always be found near plants whether in the water or on the shore. This allows them to hide from predators.

These spiders are excellent hunters and have a lot of choices available to them. 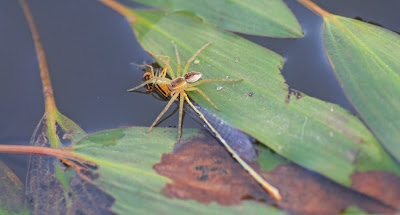 They will feed on aquatic insects as well as terrestrial insects, but more often than not they will scavenge on insects, like the one pictured here that captured a damselfly, which happened to fall into the water and could not escape again.  Larger fishing spiders will even attack young newts, small frogs, tadpoles and minnows.

Female fishing spiders are larger than the males, and females will not hesitate to kill and eat a male fishing spider if the opportunity arises. When a male approaches a female that has already mated she will most likely eat him. The male seriously lives life on the edge. Females lay their eggs inside a silken sac that she will carry to the shore and hide among the plants. She will remain near the egg sac and guard it until the eggs hatch. She will even remain with the spiderlings until they are ready to disperse. The spiderlings will over winter two times before they are old enough to mate.

Even though these spiders are apex hunters they still have to be ever vigilant of predators such as frogs, fish and birds. Excellent eyesight gives them an added advantage when avoiding predation.
These spiders are active during the day and are easily seen as they rest on the aquatic plants floating on top the waters surfaces. I've seen a dozen or more of these spiders already this year. 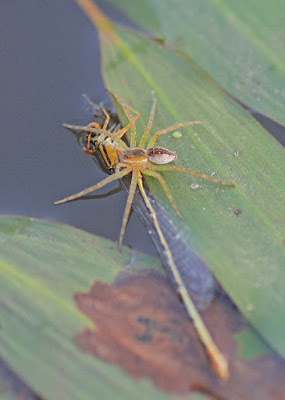 Recently while leading a group of school children to the pond at work where we planned to dip for aquatic insects, tadpoles and anything else we could capture in our nets to learn about, the kids caught one of these spiders. I placed it in the shallow tub of water we had sitting on the shoreline. Along with her there was also numerous aquatic lifeforms the kids had captured inside this same tub. When I checked on her a few minutes later she had taken full advantaged of the insects that were unable to escape and had caught a water bug. She was busy chowing down on this opportunistic meal that was provided for her when several of the kids came over to watch her eat. She grew tired very quickly of all the eyes peering down at her and she made a dash for the side of the small tub she was in and jumped ship right over the edge and ran like crazy for the pond, with the water bug still held firmly in her mouth. We let her go about her business and the kids thought it was pretty awesome to see her capture her prey, kill it and eat it....then run away with it as if we planned to steal it from her.

I wish I would have had a camera with me at that time to capture this moment with the kids and the awe and wonder they expressed at the smallest of creatures.
Posted by Shelly Cox at 4:01 PM