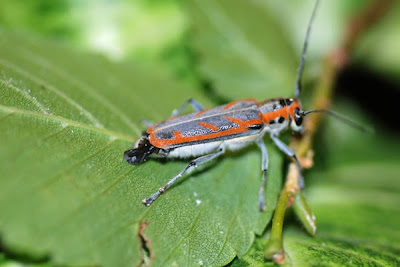 This oddly, yet beautifully, marked beetle is a Flat-Faced Beetle in the family Cerambycidae. After submitting this image to Dr. Art Evans and Ted MacRae they were both able to identify it is Saperda imitans. There is no common name for it other than "Flat-Faced Longhorn". They are very uncommon in Missouri and are associated with hardwood timbered areas. Their range includes all of Eastern North America. 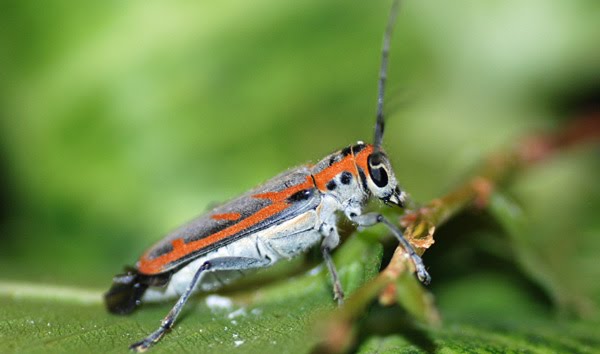 I found this one at a mercury vapor light I had set out. I had no idea what it was, only that it was something I had never seen before. Imagine my excitement to  learn that it was an uncommon beetle. I felt very  lucky to have found it.

Their elytra are dark gray with a reddish colored stripe running along the margin. This stripe extends into the sides of pronotum and the head. The underside is brownish-white and legs are gray. They are about 3/4 of an inch long.

The grubs feed on decaying hardwood trees like Hickory and Willow. Therefore they are not known to cause any significant damage to trees. Just when I think I couldn't possibly find anything new around our farm, I am surprised by things like this beetle. It just goes to show you never know what you will find, or where you will find it.
Posted by Shelly Cox at 7:02 PM