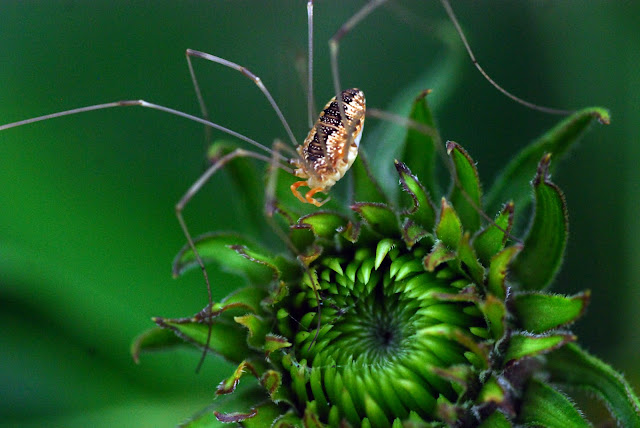 This is one of those arthropods that can be considered a misfit. They aren't an insect and they aren't quite a spider either, although they are related to spiders. Daddy Longlegs are one of those creepy crawlies that children identify with and love to hold. They are harmless, even though rumors persist that these spiders are highly venomous and if they could bite us they would be deadly. This simply is not true. They do not possess  venom; they instead feed on animal and plant matter.

Another creature often called daddy-longlegs are actually spiders. These long-legged spiders are in the family Pholcidae. Previously the common name of this family was the cellar spiders but arachnologists have also given them the moniker of "daddy-longlegs spiders" because of the confusion generated by the general public. Because these arachnids are spiders, they have 2 body basic body parts (cephalothorax and abdomen), have 8 eyes most often clumped together in the front of the body, the abdomen shows no evidence of segmentation, have 8 legs all attached to the front most body part (the cephalothorax) and make webs out of silk. This is most probably the animal to which people refer when they tell the tale because these spiders are plentiful especially in cellars (hence their common name) and are commonly seen by the general public. The most common pholcid spiders found in U.S. homes are both European immigrants. There is no proven documentation that even these spiders bite humans.

So this myth is definitely NOT true for the Daddy longlegs in the order Opilionides.....and it probably highly UNLIKELY for the Pholcids as well. 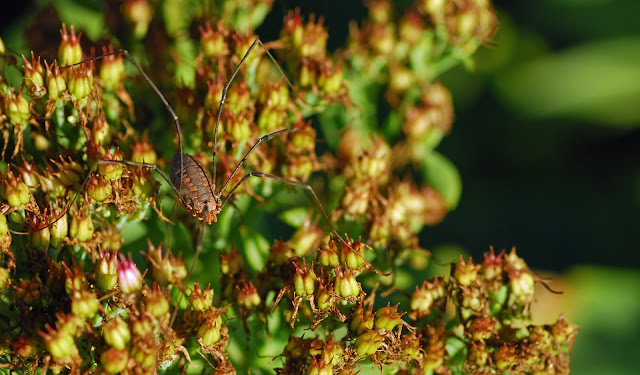 Unlike spiders which have two body parts, a cehalothorax and an abdomen, daddy longlegs have one compact body. These spider-like creatures belong to the family Phalangiidae within the order Opiliones.  with up to 150 species north of Mexico in North America. They are powerfully difficult to ID to species. They are sometimes called harvestmen, harvest spiders, shepherd spiders, phalangids, and opilionids. Most spiders have 6 to 8 eyes, daddy longlegs have 2 eyes. They do not build webs and will only be found in a web if they happen to fall into one. Then at that time they are sure to be dinner for a much more aggressive spider. These oddballs of the insect realm are fond of moist areas and will often be found around rotting logs, under rocks or near damp basements and cellars.

Rest assured it is safe for your children and your grand-children to play with these little spiders (or in some cases not so little). They are no more harmful than lightning bugs or ladybugs.

Information derived from : http://www.backyardnature.net/longlegs.htm
Posted by Shelly Cox at 12:02 PM