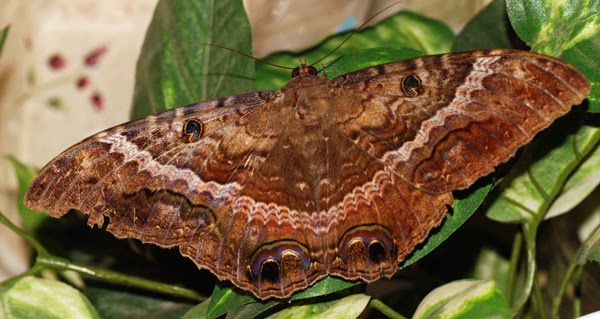 This beautiful moth is called the Black Witch Ascalapha odorata in the family Noctuidae, which are the Owlet moths. This is an impressively large moth with a wingspan up to 6 inches (there are even reports they could reach 7 inches). The females are larger than males and are marked with more contrasting colors. They have pinkish-white bands across the middle of the wings. Both males and females are brown with alternating wavy lines and bands. Often there will be a iridescent blue sheen to the wings. They are the only species within their genus in North America and would be hard to mistake for any other species. These are a tropical or sub-tropical species and are found in South and Central America as well as Texas and Florida. Often from June-October they will stray further north and make their way in Missouri as well as other areas. They have even been found in Canada.

The one photographed here was found in St. Joseph by a friend of mine named Colton. He was at work at the Miniature Golf Course where he is employed and found it clinging to the side of a wall. He knew it was something unusual and captured it to add to his own personal insect collection. He brought it by to show me to see if I could identify it. I knew right away, even before he opened the brown paper bag it was in what he had. I was so envious, I have been looking for one of these for 3 years. I am happy for him too, this may be a county record for Buchanan County. We will do some more research on it and find out. I brought the moth home to photograph it for Colton and do some research on it so I could post this blog. Now I must return it to him 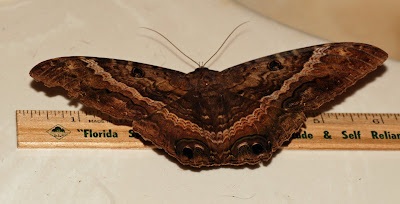 There is much myth and mystery surrounding this moth. They are commonly mistaken for bats because of their large size and their night time flying habits. The Mayans called them Mah-Ha-Na which translates into "May I borrow your house", and comes from their often being found inside homes fluttering around at night. In Mexico they are feared as a sign of death. If someone should fall ill and be visited at night by one of these moths, they will surely die. On Cat Island, Bahamas, they are locally known as Money Moths or Moneybats, and the legend is that if they land on you, you will come into money. In South Texas they are thought to be lucky if they land above your doorway and remain there, you should play the lottery, because you will win.

These moths are capable of flying great distances in only few days. They are entirely nocturnal and fly at night. They are often attracted to pole lights, porch lights or other light sources. During the day they will rest under the eaves of houses, in sheds, barns or garages. They have even been found resting underneath cars, and don't seem to be bothered at all when the car is in motion. 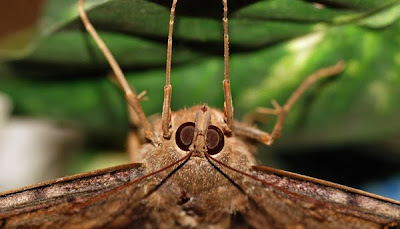 Colton is hoping to get her to lay eggs so he can attempt to raise them. The host plant are trees in the pea family. After looking up which trees would qualify in Missouri I found that they list the Kentucky Coffee Tree and Black Locust. One of our biologist where I work felt that plants in the Cassia family may work as well such as Partridge Pea. The adults are fond of overripe fruit, alcohol, and sometimes nectar.

I want to thank Colton for allowing me to bring this beautiful moth home and capture images of her. I will just have to keep looking and hopefully I will be as blessed as Colton was to find one of God's most beautiful creatures. 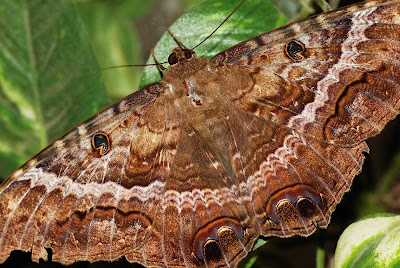