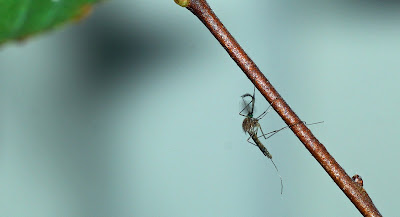 Elephant Mosquitoes in the genus Toxorhynchites are found throughout the Eastern United States, especially in the southeast. These are very large mosquitoes, which has probably earned them the common name of Elephant Mosquito. They will measure up to 1/2 inch in length and have shiny metallic scales. Their proboscis is very prominent and curved and used for nectaring at flowers. Their legs are extremely long. 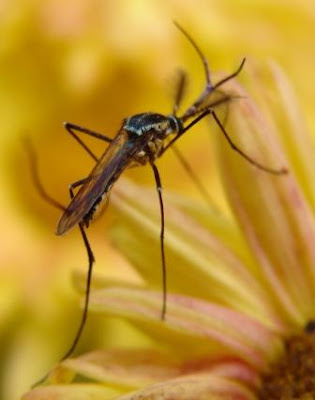 (Photo by: Steve Scott)
The females will lay their eggs in small cavities containing water. This could be in trees, old tires, bird baths, etc. They will overwinter as late nearly grown larvae or as very young adults. The larvae feed on other mosquito larvae, making them beneficial to humans. Humans have nothing to fear from these mosquitoes as they do not feed on or bite humans. Which is a very good thing considering the size of their proboscis; that would be some painful bite if they did! 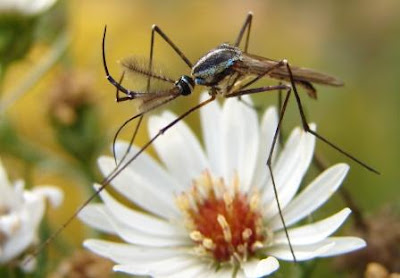 (Photo By: Steve Scott)
A good friend of mine wrote the following verse about this incredible insects:
Elephant Mosquito
He flies around with no regrets-
Oughta keep his name incognito
Although an elephant never forgets
He forgets he's just a mosquito
By: Richard Lewin
Posted by Shelly Cox at 9:09 PM